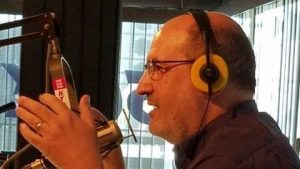 Hosting a daily talk radio show — as I did for decades — is the hardest job in show business. I include in this category doing a talk-intensive morning show on a music station, with or without an ensemble.

What makes it so difficult is having to come up with things to say to fill the time between the commercials, newscasts, traffic reports, etc. Those elements are all handled by other people, but when they elements end, the host has to start talking, and it had better be something interesting, funny, and relatable to the audience. Not just for that one segment, but perhaps a dozen or more, every day. Try thinking of even five new things you want to talk about today that you didn’t talk about yesterday. Not so easy, is it?

If you’re doing a morning show, you also have to juggle all the other elements and make sure you hit them on time (e.g. network news at the top of the hour, traffic on the tens, sports on the quarter-hour, etc.). Often that means cutting short segments you’re having fun with. Or worse, realizing you’ve run out of things to say on a subject but the next break won’t come for four (or fourteen!) more minutes. Too bad. Keep talking.

Let me anticipate your suggestions about other showbiz professions that seem harder.

Standup comedy. Yes, most comics come up with their own material, but they get to hone it by getting onstage and gauging audience reaction to every line. That instant feedback gives them the opportunity to throw out what didn’t work and keep improving the material that does. It’s a process that takes weeks, months, sometimes years. That’s why even pros like Chris Rock and Iliza Shlesinger only release new Netflix specials every year or two.

Doing a daily radio show, you don’t know if the listeners in their cars are laughing at something witty you came up with on the spur of the moment. But I can remember many times when I finished what I considered a fantastic interview or talk topic, only to remember I still had two more hours to go. And another show to put together from scratch tomorrow.

Screenwriter/playwright. Yes, you work alone and can put any words you like on the page, but you’re going to revise, revise, revise. Hard to do in live radio. And before an audience of any size hears it, you need actors to perform your words, builders and painters to create your set, a director to guide your script through the process, and someone to apply makeup and wigs. I never wore either of the latter two in my forty years on the air (except when I did a nightly segment on a local TV station, for which I applied some powder to keep me from sweating visibly — but that was for TV, not radio).

Disc jockey. There was a time when I would have included this in the same category of difficulty as morning show or talk show host. That was in the era of Top 40 radio, when DJs had to come up with something new (and hopefully amusing) to say every two-and-a-half to three minutes between songs. To make it more difficult, they were limited in time to however long the musical intro of the next tune was, finishing just as the vocalist sang the opening line (i.e. “hitting the post”). I still have tremendous respect for those who elevated that talent to high art, inspiring me in my early days. Sadly, radio DJs don’t need that skill anymore, especially in circumstances where they’re recording all of their elements ahead of time (i.e. voice tracking) and having a computer insert the spoken segments between the other elements.

TV talk show host. Have you ever seen how many writers are employed to come up with the monologue and desk bits performed by Stephen Colbert, Jimmy Fallon, and Seth Meyers (just to name three)? In each case, it’s more than a dozen. My friend Jon Macks made a very good living writing monologue jokes for Jay Leno for 22 years. If Jay contributed material, it was a very small percentage. In addition, those hosts have segment producers who pre-interview guests to come up with suggested topics to cover, or read a guest’s book and make a list of questions likely to spark a funny anecdote, or test out the wacky stunt the host will “spontaneously” engage in at some point in the show. James Corden doesn’t put together Carpool Karaoke on his own.

When I hosted radio shows, my “producers” were mostly responsible for answering phones, getting commercials lined up, and — in my morning music radio days — pulling the albums, CDs, or carts I would then cue up and play. It was an entry-level position, often filled by people with no prior radio experience.

None of them ever pre-interviewed my guests. If I was going to interview an author, I’d skim through a book in 15-20 minutes the night before to make my own list of questions. I had to spend two hours at a time at movie screenings because I was going to get one of the stars on the phone for all of 8 minutes the next day.

For decades, Terry Gross of NPR’s “Fresh Air” has been rightly recognized as the best interviewer in the business. She is obviously invested in every conversation, has done her homework, and knows how to ask questions to elicit compelling responses from her guests. But if you listen to the end of any “Fresh Air” episode, you’ll hear the names of the people who work behind the scenes to book those guests, edit the interviews, and insert relevant audio when necessary. The result is usually nothing less than great, but it’s not a solo endeavor.

Most of the rest of us in the business haven’t had those resources and personnel available. Even when I had someone booking guests for my syndicated “America Weekend” show, I was almost always the one who suggested who she should reach out to and try to schedule them. The same was true when I did daily local shows. There was never a day when I walked into the studio and was handed a sheet of paper full of information and areas to touch on like the prep work that Robin Roberts or Savannah Guthrie get.

Most importantly, in the segments without guests (the vast majority of talk radio’s airtime), I — and I alone — was in charge of whatever was going to be discussed on the show every hour of every day. That meant staying on top of the news, knowing what was going on in pop culture and sports, and often coming up with out-of-left-field subjects that would make the phones ring.

I once had a Program Director named Andy Beaubien who was waiting for me when I walked out of the air studio at the end of my first show of the week. I asked him what was up, and he said, “I don’t know how you come up with so much stuff to talk about on Monday mornings. Nothing happened over the weekend, and yet you managed to fill four-and-a-half hours — again!”

It was one of the best compliments I ever received.

Because dead air is a no-no, the job requires a talent for ad-libbing about something over and over again. There are no writers and thus no script. It also means being able to pivot when a listener’s call or a colleague’s comment takes things in a new, often better direction — or when there’s breaking news that can’t be ignored.

While my midday show was mostly long-form topics or interviews, as a morning show host I had to be able to switch and refocus my brain on a new topic or guest after every commercial break. For instance, in a typical half-hour today, I’d engage with the sports anchor for a couple of minutes about how the Cardinals’ bullpen is doing, then break for commercials, then talk with an expert on what really impacts gas prices, then break for commercials, and turn next to a discussion with a political analyst about Pat Cippolone’s testimony to the 1/6 committee. And on and on and on.

For a long time, I had a daily feature on my show called The Harris Challenge, a trivia game I created for which I wrote over 3,000 new questions a year. There was no one else to do it, nor to compile the oddball news stories in another daily segment called Knuckleheads In The News. It was all on me, just as it has been on all those who have created similar elements for their radio shows. You can’t just give Mizzou tickets to caller number nine. You’ve gotta keep the listeners engaged and interested, or they’ll choose some other audio source. Let’s see Jimmy Fallon try that without a staff.

I don’t mean to diminish the contributions of the people I shared the airwaves with. Anytime I was on the air, I had an open microphone policy, so any of the cast members (news, sports, producer, intern, etc.) could chime in with a comment, a funny line, a piece of info, whatever. I always thought of my shows as a conversation, not a monologue. Several were really good, and their presence elevated the quality of the output considerably. Plus, they added to the fun atmosphere that made going to work each day enjoyable.

But only one person can control the steering wheel, and in a radio studio, that’s the host.

Are there other professions in the creative arts that are anywhere near as challenging as daily radio host? None of this is to disparage actors, writers, directors, editors, comedians, etc. They all have their skill sets, but they don’t have the ongoing pressure to stay fresh, funny, and eminently listenable over days, weeks, months, and years that those behind radio microphones do.

When I told my friend Mark Evanier — who knows more about show business than anyone I’ve ever met — I was going to write a piece explaining why talk radio host is the toughest job in entertainment, he looked me straight in the eye and said, “Except drummer for Spinal Tap.”