Hell Of A Time 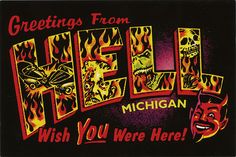 A recent story about the town of Hell, Michigan, being up for sale brought back a flood of memories from the late 1980s.

I was doing the morning show at WCXR/Washington, where the heat and humidity become oppressive in July and August (just like in St. Louis). One day, I read an article about a town in Michigan called Hell, and wondered whether the temperature there was below ours, allowing me to say DC was literally hotter than hell.

This was in the pre-internet days, so I couldn’t just look up the weather in Hell. I found the area code for that part of Michigan, then called a directory assistance operator and asked her for the number of any business in the town of Hell. She gave me the number of the Dam Site Inn, which sounded perfect. When I called, a man named Virgil answered the phone. I asked his permission to put him on the air and, when he agreed, a new regular contributor to my show was born.

He sounded exactly the way you’d want a guy named Virgil to sound. He was more than happy to explain that the Dam Site Inn was a dive bar that attracted a lot of bikers. Although he wasn’t the owner, he got in there early every morning to set up for the day and make sure that the previous evening’s mess had been cleared away. He told me that Hell was just a small town with a few businesses including the bar and a nearby ice cream parlor. Tourists often came through to get things postmarked at the Hell post office, and there was a wedding chapel, too (for couples that want to start life together in Hell). Best of all, he had a thermometer in his window so he could tell me the temperature there — and confirm that yes, in fact, we were hotter than Hell that morning.

After a few minutes, I said goodbye to Virgil and thanked him for his time. He said he was happy to do it and I could call any time. So I did. Not every day, but about once a week during those stifling summer months. I even called him in the winter to see if we were colder than Hell — it turned out that snowballs, in fact, had a pretty good chance there. Each and every time, Virgil was gracious, funny, and a perfect real-life radio character.

My audience loved him as much as I did. The following summer, I got a call from one of my listeners who, on a cross-country trip, had stopped in at the Dam Site Inn. He described the place as exactly the kind of dive bar Virgil had said it was, but everyone inside was having a good time, while outside there were dozens of motorcycles parked in the lot. While there, he had told Virgil the reason he came in was because he’d heard about the place on my show, and Virgil replied, “Oh, yeah, I know that guy!”

I continued calling Virgil on occasion over the next couple of summers. He was willing to talk about any subject I brought up and played along like a member of the team. But one day when I called, someone else answered the phone. To make a long story short, it turned out that Virgil had died. He’d had cancer, but never mentioned it.

After Virgil was gone, I stopped calling Hell. The Dam Site Inn is still around, but Hell just isn’t the same without him.