Here’s To You, Democracy! 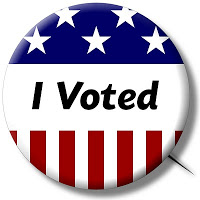 First, a quick plug: my brother Seth (former Deputy Secretary of Labor) has the best analysis of today’s election you’ll read anywhere, even before the votes are counted. As for my analysis…


Most Americans are thrilled when election day finally arrives. Not because they’re excited to vote — turnout will be around 42% today — but because it’s the last day of those horrible political commercials that have taken over the airwaves for more than a month (at a reported cost this year of $4 billion!).

I don’t believe any campaign ads, because they all sound the same. They’re all negative, regardless of party, painting their opponent as a lying cheating weasel who wants to let pedophiles teach your kids, rapists date your daughter, and sell your house to buy drugs for terrorists. And politicians wonder why their favorability ratings are somewhere between a root canal and Ebola. What do you expect us to see when you paint that picture repeatedly?

The laughable thing is that, even though Americans dislike politicians on the whole, they still get re-elected. People still go to the polls and choose the same worms they chose last time, then go home and complain again. The easiest way to win an election in this country is to have already won one — incumbency trumps all.

There’s too much important stuff that needs to be done, but too many office-holders who have no idea how to do it or any intention to change things — unless they get a big enough check from some corporation or plutocrat who wants to bend political will for their own greedy purposes.

I’m not saying there aren’t any good people in elected office. I’m saying that you have a better chance of winning the lottery than finding someone worthy of respect in Congress, your state capitol, or city hall. That’s why, even though I cast a ballot in every election, most of the time, I’m not voting for a candidate, I’m voting against an idiot who stands for everything I find repellent.

As for the physical act of voting, it’s ludicrous that we’re still using the same tired technology and systems. Here’s what I wrote on that topic in 2012.

Here’s to you, democracy!