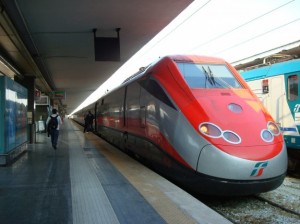 During our recent Italy trip, we boarded our first-ever high-speed train to get from downtown Rome to downtown Florence, making the 175-mile trip in 90 minutes. Although we were rolling at 150mph most of the way, we could hardly tell from our seats unless we looked out the window.

The ride was smooth and comfortable, and made me wonder why the US still hasn’t caught up to most of Europe and eastern Asia, where high-speed travel is the norm. I understand that there are right-of-way concerns with existing tracks, and not enough available land to build high-speed-only tracks in many area without overusing eminent domain. I’m also sure that the airline industry lobbies against making train travel faster and easier.

But considering that St. Louis is a 4-5 hour drive from cities like Chicago, Kansas City, Indianapolis, Memphis, and Tulsa, being able to make those trips in under 3 hours would change tourism in the midwest. Not only would St. Louisans visit those places more often, but people from there would come here.

High-speed travel has been debated and held back long enough, considering the first attempt to get it rolling in the US was in 1965 — nearly fifty years ago! There are some current high-speed rail projects underway, thanks to the 2009 stimulus act, but they’re still years away from completion. Illinois is improving its tracks on the Chicago-to-St. Louis route in hopes of allowing speeds up to 110mph — but with too many stops along the way, the train won’t be traveling at that speed for very long. And the St. Louis end isn’t actually in St. Louis. It’s in the suburb of Alton, Illinois.

California is developing a high-speed system between Anaheim and San Jose, but it won’t open until 2028. Amtrak’s proposed high-speed rail between New York City and DC won’t be ready until 2040. They say those trains will do over 200mph, which would be a great improvement over the paltry 79mph that is the current top speed.

Even if we did catch up to Europe, we’d still be behind China, which has jumped ahead technologically to mag-lev trains (using magnetic levitation, the trains hover above the tracks, still traveling at high speeds), and is working to make those even faster. We first saw a mag-lev train exhibited at the 1986 World’s Fair in Vancouver. Standing next to the tracks, the only audible sound was a quiet “whoosh” as the mag-lev train passed. That was nearly three decades ago.

Unfortunately, the “whoosh” we heard that day was still louder than the voices of support for high-speed rail in this country, yet another example of Congress’ failure to invest in improving America’s infrastructure with long-term thinking.