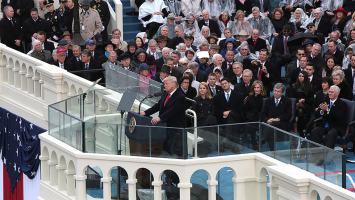 Watching the inaugural on Friday, it was so weird seeing Obama laughing it up with Trump after the latter had said — and continued to say in his inaugural speech — all sorts of horrible things about him. It was even weirder seeing Hillary there. Oh, she told people she did it because she loves our country and our democratic process, but it was just as awkward seeing her there as it was when other losing candidates sat and watched the man who beat them take the oath of office (e.g. Bush 41, who, as incumbent president, had to be there when Bill Clinton took the oath in 1993).

As I recall, none of the Cleveland Indians showed up to sit onstage at the end of the Chicago Cubs World Series victory rally last fall. Because who wants to be there to celebrate the person who took the thing you wanted most?

I couldn’t do it.

I had one occasion in my radio career when management decided to replace me in mornings, but because I was still under contract for another year and they didn’t want to pay me for doing nothing, had me do my show in afternoon drive. I rationalized that I was still getting to do my show, but without having to wake up at 4am, which I’d done for 15 years. Yet deep down, it hurt like hell, and I had no interest in being around the new morning drive guy. Didn’t even listen to him. However, I did walk around with a huge grin when I got better ratings in the afternoon that he did earlier in the morning.

As for our new president, anyone who thought he’d be different once he was sworn in should have been disabused of that notion almost immediately. He will always be the same thin-skinned narcissistic liar he’s always been. Just look at what he had his press secretary do Friday afternoon, rebuking the media for reporting that the crowd on the national mall was smaller that it had been for other presidents. Trump is a guy for whom size really matters. In his egomaniacal eyeballs, he saw the biggest crowd ever. The fact that photos and video prove otherwise doesn’t matter — blame it on camera angles!

His inaugural address was almost word for word identical to the speeches he gave at his campaign rallies — full of vitriol and false promises. He was never going to be inspirational or inclusive. It isn’t — and never will be — who he is. You have a better chance of turning around an internet troll. Oh, wait, that’s who you elected to the most important job in the world.

While watching him take the oath of office, my mind flashed back to that same scene eight years ago when Chief Justice John Roberts screwed up the oath at Obama’s first inaugural. We should have known then how impossible the Republicans were going to make it for him to get anything accomplished.

There are six words in the presidential oath that always jump out at me: “to the best of my ability.” It reminds me of all those times my teachers told my parents that I wasn’t “working up to my potential.” Maybe it wasn’t me. Maybe it was that they had set the “potential” bar a little too high.

Maybe that’s why the founders included that clause in the oath in Article II, Section 1 of the Constitution. As an out, an excuse, an opportunity to claim, “hey, I’m doing the best I can!” If you think of it that way, perhaps it wasn’t Bush 43’s fault that he was the worst president of our lifetime. He was just doing the job to the best of his ability. It’s not his fault that we put him in the Oval Office and believed he’d be a great leader. He simply couldn’t do the job any better than he did — to the best of his ability.

Unfortunately, with Trump’s love of superlatives, I’m sure he heard the word “best” in the oath and thought it was an advance assessment of how he’ll do over the next four years, when — in reality — we’ve set the “potential” bar lower than it’s ever been.