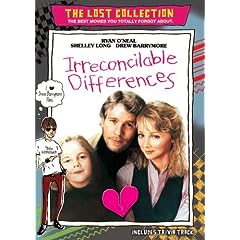 When I started the Movies You Might Not Know list, I vowed that it would only include movies that had been released on DVD. That meant leaving off films I enjoyed in the theater, like “Carny” and “Wrestling Ernest Hemingway,” which have yet to become available.

That can’t-list group also included “Irreconcilable Differences,” but I’m happy to say I can now add it to the list because it’s finally available for home viewing, 25 years after its release.

The movie stars a very young Drew Barrymore as a 9-year-old girl who wants to divorce her parents, Ryan O’Neal and Shelley Long. But it’s less about Barrymore’s character than it is about the relationship between the adults, beginning when he’s a film professor hitchhiking across country to a new job at UCLA when she picks him up in her fiancee’s car on her way to getting married in San Diego. Before long, their meet-cute scenario evolves into a funny satire of the moviemaking business, with Sharon Stone (in her pre-diva nearly-unknown days), Sam Wanamaker, and a short funny sequence with Stuart Pankin (remember him from “Not Necessarily The News,” which is also not yet on DVD?) as an assistant director trying to keep O’Neal sane during the filming of a musical version of “Gone With The Wind.”

O’Neal gives a comic performance on par with his work in “Paper Moon” and “What’s Up Doc?” (observant viewers may note a similarity in O’Neal luggage, too). As for Long, she matches him every step of the way, doing her best work outside of “Cheers.” The movie devolves into a little bit of family-drama treacle towards the end, but now that “Irreconcilable Differences” is on DVD, it’s more than worth your time.

See the entire Movies You Not Know list, and add your suggestions!