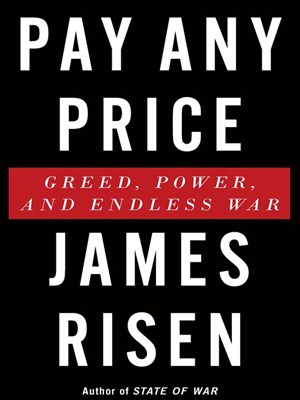 James Risen is a two-time Pulitzer Prize-winning investigative journalist who has uncovered many things our government has done in the name of Homeland Security that stretched (ok, broke) the limits of the law, including his revelations about warrantless wire-tapping by the NSA. For that, the Obama administration has been trying for years to force him to reveal his sources, but he keeps refusing, despite the threat of jail.

When Jim joined me on KTRS, I asked him for an update on his legal status before we delved into the important matters he reveals in his new book, “Pay Any Price: Greed, Power, and Endless War.”

We discussed the amazing sums of money that have literally been lost during our wars in Iraq and Afghanistan — stunning amounts of cash that were loaded onto pallets of military cargo jets, flown to those countries, and never seen again. We also talked about the too-big-to-fail war profiteers, including many companies that continue to receive huge Pentagon contracts even after being found to have committed fraud. And Jim also told the story of Dennis Montgomery, who convinced the Bush administration he could spot secret Al Qaeda messages in Al Jazeera TV broadcasts — a hoax so blatantly phony that CIA Director George Tenet and others covered it up when another country protested the resulting actions taken by the US.