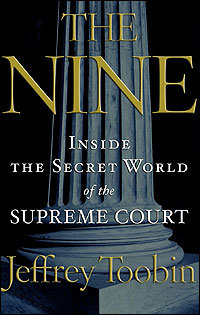 Jeffrey Toobin was back on my show to talk about his book “The Nine: Inside The Secret World of the Supreme Court.” He was given extraordinary access to the justices (the ultimate “activist judges”), their clerks, and others, which led to some interesting stories.

I asked him about why Sandra Day O’Connor turned against President Bush, why she resented Samuel Alito even before he replaced her on the court, and what her relationship was with the only other woman to wear those robes, Ruth Bader Ginsburg.

We discussed how the 2008 presidential election will have enormous ramifications for the court, since three of the liberal justices are likely to retire in the next few years, and whether pro-choice Rudy Giuliani would appoint pro-life justices to appease the conservatives in his party.

Toobin explained about why the justices won’t allow cameras in their courtroom, whether their minds are made up before they even hear a case, and whether oral arguments or comments from their colleagues ever change their opinions.