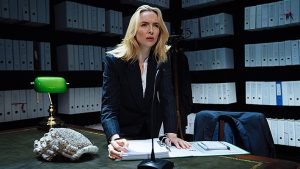 I saw something extraordinary the other night. It was the filmed version of the stage play, “Prima Facie,” a one-woman tour de force starring Jodie Comer.

From the moment I saw her in the first episode of “Killing Eve,” I knew Comer would be a star. Even though that show dissolved by its third season into a faint version of the original, she has moved on to star in movies like “Free Guy” and “The Last Duel.” This production of “Prima Facie” is Comer’s first time on stage in London’s West End — and what a debut it is.

Comer portrays Tessa, who climbed up the ladder from her working class roots to become a defense attorney at a top law firm in London. She loves her job and is damn good at it.

As the play gets underway, she’s explaining how she views the law as a game in which she enjoys trapping witnesses with their own words. From the moment she begins, Comer never stops talking, even as she has to move tables and chairs around for different settings. She also makes costume changes while keeping up the briskly-paced running monologue, in which she acts out some of the other characters in the scenarios she describes.

Comer’s performance is all-absorbing, especially at the pace she sets early and never lets up from. That is, until the second half of the intermission-less 90-minute show, when the plot twists and Tessa is forced to see the other side of the legal game.

The script by Suzie Miller is shrewd and clever throughout, although it gets a bit preachy in its final few minutes. In Tessa, she has created a character who loves to win over an audience, whether it’s in a courtroom or a theater. Director Justin Martin gives Comer lots to do and a big space to do it in, surrounded on three sides by books containing the records of legal cases.

Originally produced in Australia three years ago, “Prima Facie” is given a huge boost from Comer’s talent. She gets to use her native Liverpudlian accent and is nothing less than mesmerizing through every second of the play.

I didn’t travel to London to see this performance. It was filmed and presented as a one-night-only Fathom event in movie theaters across the US. Sadly, there were only a dozen or so people in the theater with me, and no streaming video plans have been announced. However, Comer has signed a deal to reprise “Prima Facie” on Broadway starting in spring 2023, so more Americans will get a chance to experience it. I won’t be surprised if she wins the Olivier Award in the UK and then the Tony Award here in the US.

To anyone who wondered if Jodie Comer could be as good on stage as she is on screen, the answer is no — she’s even better.