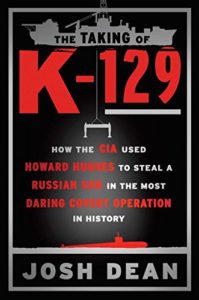 Here’s my conversation with Josh Dean, author of a book with a very intriguing title: “The Taking Of K-129: How The CIA Used Howard Hughes To Steal A Russian Sub In The Most Daring Covert Operation In History.” No, it’s not a novel — it’s a true story, and I won’t be surprised when it’s turned into a movie.