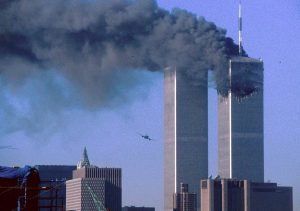 Remembering the past while getting on with our lives. That’s what today was about.

This morning, my daughter saw me smiling at her and said, “Daddy, you shouldn’t be smiling today! This is September 11th!” I had to remind her that, while it was the anniversary of a horrible event we should never forget, we can’t let ourselves be so maudlin that we can’t enjoy the tremendous number of good things we still have. For instance, those frozen cinnamon toast waffles she enjoys for breakfast, hot from the toaster oven! I’m proud that, at nine years old, she understands the significance of this date (and hopefully always will), but she shouldn’t let it overwhelm all the positive aspects of our daily American life.

There are adults who take today far more seriously than need be. The major airlines canceled over 3,000 flights today because so many people refused to fly on September 11th. Whatever their reason, their fear is misguided. If there’s one thing we can predict about Al Qaeda, it’s their unpredictability. The 1993 bombing of the World Trade Center, the attack on the USS Cole in Yemen, the 9/01 attacks, and other dastardly deeds were not done on dates with any significance. They may be thugs, but give them credit for understanding that you don’t confront an enemy when it is most prepared, you attack when their guard is down. They’re smart enough to know not to come after us on a major holiday or anniversary, or at a huge event like the Super Bowl. I remember being at work on the day of 9/11 when someone asked, “Is today an important date in history?” We checked every source we could and discovered the day was nothing more than a Tuesday. The only irony was that the date matched our national emergency number, 911.

On the website of the magazine Reason, Matt Welch has a good piece today, entitled “The Day Nothing Changed.” He points out how, two years after the attacks, America isn’t really very different than it was in August, 2001. He’s right. Parents still take their kids to soccer games, we entertain ourselves with movies, TV, radio, and the internet, roads remain clogged at rush hour, business (for the most part) continues to be conducted. We know in the back of our minds we may be hit again at some point, but we don’t worry about it so much that we can’t live our lives the way we always have. Most importantly, we know that the vital concept at the heart of America — freedom — shows very few signs of any dents or dings, even with the dreaded Patriot Act.

I wonder if any members of Al Qaeda have considered this notion in the last two years. I’d like to think at least one of them has said to himself, “We hit America as hard as we could, and they’re still there, still free, still drinking beer, still telling jokes, still cutting their lawns, still eating cheeseburgers, still going about their personal matters. Meanwhile, we sit in this stinking cave waiting for Osama to finish his dialysis treatment and help us roast a goat. I’d never say this out loud, for fear of being tortured, killed, and then tortured some more, but maybe the Land Of The Great Satan has the right idea! Excuse me, Allah, but you can keep your 72 virgins on ice for awhile. I want the American Dream, complete with 3,000 minutes of free night and weekend calling with no roaming charges!”

One last item, semi-related to this day and its connection to terrorism. Our stab-you-in-the-back “Partners In Peace,” the Saudis, have declared that Barbie dolls must be banned in their kingdom. The order came from their religious police, officially known as The Committee for the Propagation of Virtue and Prevention of Vice, which sounds like its members include Jerry Falwell and Dr. Zaius from the original “Planet Of The Apes.”

Their reasons are twofold. The first is that Barbie is a threat to morality. The second reason is seemingly the worst offense possible in that part of the world — they claim Barbie is Jewish.

Barbie a Jewess? HA! Let me tell you something, my peace partners, by paraphrasing Lloyd Bentsen. I know many Jewish women. My wife is a Jewish woman. And Barbie is no Jewish woman!!

If there’s any doll in the world that screams “Gentile!” it would be Barbie. She’s the least Jewish woman since Blythe Danner played Jonathan Silverman’s mother in “Brighton Beach Memoirs.” Next they’ll ban GI Joe because he’s one of the Fab Five on “Queer Eye For The Straight Guy.”