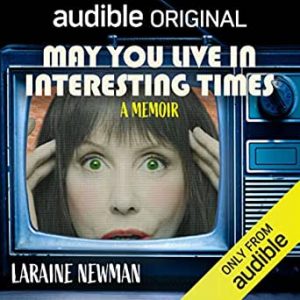 A couple of weeks ago, during our Florida vacation, I went to the Broward County Jewish Community Center for a joint appearance by Laraine Newman and Alan Zweibel. Newman, of course, was one of the original Not Ready For Primetime Players on “Saturday Night Live” (or, as it was known the first season, “NBC’s Saturday Night”). Zweibel was one of the original writers on that series, and has since gone on to many projects, some of which landed him on my radio show as a money-in-the-bank guest (several of our conversations are here).

They were both there to promote their books. His is “Laugh Lines,” which was published in 2000 and is still available (I wrote about it here). Hers is “May You Live In Interesting Times,” which only exists in audio form (not print) in a special edition she did for Audible.

I’m not a particular fan of audiobooks because they take so long to consume — Laraine’s is a little over 9 hours long. I usually only listen to spoken-word content while driving or on a long walk, because I can’t just sit in my living room and do nothing but pay attention to what’s coming through my earbuds. Something will always distract me, or I’ll remember some chore I was supposed to take care of earlier that day. Listening to Laraine’s book would mean committing myself to her story for over a week, but she intrigued me so much that evening, I went ahead and downloaded it the next day.

Since I never had the chance to speak to Laraine on the air, I didn’t know much about her post-SNL career, or the obstacles she faced in her personal life, including serious drug addiction. I did know that, over the last couple of decades, she’s become one of the top voice artists for animated movies and TV shows (she’s worked for my friend Mark Evanier on several projects). But I didn’t know she’d traveled to Paris as a teen to study mime with Marcel Marceau. Or that she’d been one of the founding members of the seminal improvisation group The Groundlings. Or that she’d hung around some of the important LA rock clubs of the 1960s. Or that she’d made her first showbiz appearance at age four on Art Linkletter’s “Kids Say The Darnedest Things” (where she learned that making the audience laugh meant getting more camera time with Art). Or that she’d started using drugs at 13 and didn’t kick the habit until she was 35.

She doesn’t shy away from telling the depths those drugs took her to, or her efforts to put them in her past. In fact, she’s quite frank about every aspect of her life she discusses in “May You Live In Interesting Times.” Of course, Laraine spends a considerable amount of time discussing her five-year stint on “Saturday Night Live,” from how Lorne Michaels found her, to her friendship with Gilda Radner, to such characters as Valley Girl Sheri and Connie Conehead.

The best part of the audiobook is that Laraine uses her talents to recreate not only her own voice, but those of many of the other people she worked with, dated, or merely met casually. And wow, does she drop names, because she grew up in Beverly Hills, where she went to school with people who became famous, too, and routinely bumped into celebs like Fred Astaire on a street corner. I was so caught up in her memoir those nine hours went by very quickly — and had me laughing out loud several times.