Losing Her Son Made Her An Activist 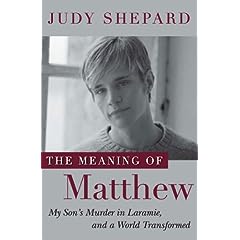 Judy Shepard lost her son, Matthew, in October, 1998, when he was beaten to death for being gay by two men in Laramie, Wyoming. The incident became a landmark in the push for hate-crimes legislation, which has been passed in several states, but never on a national basis.

On KTRS/St. Louis today, I talked with Judy about why she feels such legislation is necessary, how her son’s murder turned her into a gay rights activist, and how she deals with people in her town who refuse to accept what really happened to Matthew.

As you’ll hear, she started the interview off a little tentatively, but eventually got rolling. Her book is “The Meaning of Matthew: My Son’s Murder in Laramie, and a World Transformed.”