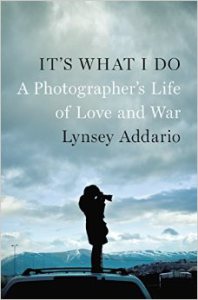 Those are the words of Lynsey Addario, who has spent most of this century in some very dangerous places (e.g. Iraq, Afghanistan, Darfur, the Congo, and Libya) taking pictures for the NY Times, National Geographic, Time magazine, and more. She has won a Pulitzer Prize and a MacArthur Genius Grant, and has written about her experiences in “It’s What I Do: A Photographer’s Life of Love and War.” When she joined me on my show, I asked her: