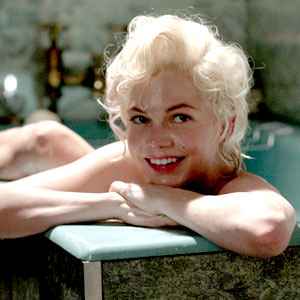 I’ve never gotten the Marilyn Monroe thing.  Maybe it’s because I’m not of her generation, or maybe because I’ve never seen her in anything except the perfect comedy “Some Like It Hot” and the far-from-perfect Marx Brothers vehicle “Love Happy.” Don’t get me wrong — she had a helluva body, but it was clear there wasn’t much else there (the modern word for that: Kardashian).

So, when I saw “My Week With Marilyn,” it wasn’t because I was a fan of hers, but because I usually enjoy movies about movies. In this one, a young guy named Colin is hired by Lawrence Olivier to help out on a movie he’s making with Monroe — as preposterous a bit of casting as Colin Firth co-starring with Paris Hilton.

While it pretends to be a little bit inside-the-industry and a lot more star-gazing-bio-pic (with a very solid performance by Michelle Williams as Monroe, seen above), the movie is really about how men allow bombshell women, particularly famous ones, to get away with pretty much anything.  Monroe’s constantly late, keeping Olivier and the entire crew fuming and waiting for hours while she sits freaked out in her dressing room.  She insists on having her acting coach by her side at all times.  When she wants to go for a drive, she tells Colin where to go and what to do and he pants like a poodle in heat, giving in to her every whim.  She is endlessly narcissistic and riddled with problems, obviously fighting severe mental difficulties and pharmaceutical nightmares.

None of that keeps Colin from falling for her, head over heels. Same for virtually every other man she encounters, except Olivier, who is exasperated by her.  Each of the enthralled men no doubt harbors a secret sexual fantasy about Monroe, but it’s better they never consummate their fantasies, because that va-va-voom superpower wears off after awhile (as her frustrated husband Arthur Miller can attest after escaping her grasp in England to return to the US and some semblance of sane existence).

At some point in their lives, most men encounter a woman like this.  Perhaps they even date her for awhile. I did.

Before I met my wife, I went out with a fashion model for a few weeks.  She wasn’t smart, but she was stunning and sexy and, most important, willing. As a guy in my early twenties, the brain was not the dominant decision-making organ in my body, so I put up with all sorts of nonsense — some of which bordered on the psychotic — because I knew where we’d end up as the evenings wore down. But after awhile, something Bill Maher once wrote kicked in: “Show me the most beautiful woman in the world, and I’ll show you a guy who’s tired of fucking her.”