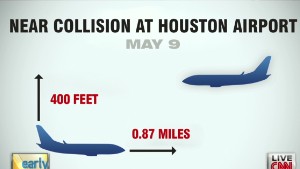 There have been four near-misses in the skies over major US airports already this year — including one involving two United Airlines flights earlier this month in Houston — and it’s not because we have too many airplanes in the air, says my America Weekend guest Mary Schiavo.

The former Inspector General for the Department of Transportation, now an attorney for victims of air crashes, explained that the problem is with the air traffic controllers in the towers, and how FAA rules keep them from being fired or even disciplined when they make mistakes that could cost hundreds of lives. Schiavo reveals the details in a recent report from the IG’s office about why there aren’t enough new controllers coming up through the system to replace the veterans who are retiring, and how Congress doesn’t seem to care.