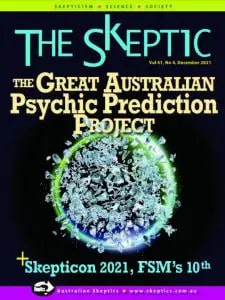 It’s been a long time since I wrote anything about the con artists who profess to be psychics, but I can’t pass up the opportunity to mention The Great Australian Psychic Prediction Project. It was run by Richard Saunders, one of the leading skeptics down under, over the course of 12 years. In that time, as described in the Australian Skeptics’ quarterly publication, he and his colleagues analyzed over 3,800 psychic or otherwise paranormal predictions made by 207 people in Australia claiming to have knowledge of future events from 2000 to 2020.

As Saunders summarized in the December, 2021, issue of The Skeptic:

To that last point, none of the so-called psychics predicted the 9/11 attack on the US in 2001, the Indian Ocean earthquake and tsunami that killed more than 227,000 people in fourteen countries in 2004, Michael Jackson’s death in 2009, the disappearance of Malaysia Airlines flight 370 in 2014, the fire that engulfed the Notre Dame cathedral in Paris in 2019, or the beginning of the COVID-19 pandemic in 2020.

The list of incorrect predictions included Hillary Clinton winning the 2016 presidential election, Osama bin Laden not being captured because he’d had plastic surgery to hide his identity, and the use of anti-gravity to lift heavy objects.

With a record of so many more misses than hits, why do psychic predictions still garner attention from the media? The GAPPP report explains:

Many TV and radio shows will feature people who claim to have paranormal powers, giving their predictions in December and January for the year ahead, but rarely, if ever, will the same shows make an analysis of the predictions at the end of the year. If they do, it will be to mention the predictions that came true, picking those that were uncontentious or those that in the opinion of the psychic came true. Incorrect predictions are generally ignored.

This situation is expected, as the TV and radio shows are not in the business of downplaying or degrading claimed psychic abilities. The segments are usually short, enjoyed by the viewers on the day and soon forgotten. The same can be said for magazines that print predictions – their readers will enjoy the column, based largely on celebrity gossip, and soon forget it. It would be counter-productive for the producers or editors to cast doubt on these people who are paid, or receive exposure, and are helping to generate income for the media outlet involved. It is, after all, a business.

The word of the psychic, that they are amazingly accurate – complete with a few examples – is often enough to meet the editors’ or producers’ requirements. It is more important for the psychic to produce column inches or present well on TV. Whether the predictions made ‘on the day’ later turn out to be wrong is of no particular importance.

There’s another word for it: laziness. Giving these con artists attention is too easy, a cheap way to fill airtime with no effort by the interviewer to take them to task for spewing nonsense. I made that point in 2017 when I called out another host on a radio station I worked for who had spent an hour letting a “psychic” answer listener questions. You can hear that rant here.

The Australian Skeptics have published their report and, unlike the bogus paranormalists, explained their methodology, broken down the results into easy-to-understand categories, and even — rather boldly — foreseen what psychics will say in response to the project. Great stuff.