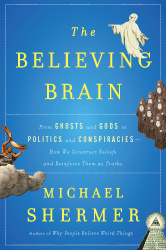 I became familiar with Michael Shermer‘s work through his presentations at the James Randi Educational Foundation‘s annual Amazing Meeting, where Michael is almost always the first speaker. In addition to publishing Skeptic magazine, he has written several books, including “Why People Believe Weird Things” and “Why Darwin Matters: The Case Against Intelligent Design.”

I invited him to join me today to talk about his latest, “The Believing Brain: From Ghosts and Gods to Politics and Conspiracies — How We Construct Beliefs and Reinforce Them As Truths.”

Since we’ve just commemorated the 10th anniversary of the 9/11 attacks, we started out discussing why there are still people who believe that it was the Bush administration, not Al Qaeda, that was responsible for the devastation of that day — despite a comprehensive debunking of those conspiracy theories in Skeptic magazine five years ago. That led to an explanation of how we’re born with brains that want to believe everything, how hard it is to shed long-held beliefs, and why we see patterns in life that aren’t really there.

We also talked about the danger of misinformation from authority figures, whether they’re parents, politicians, or people in white lab coats — such as the fallout from the false claims of connections between vaccines and autism, and Michelle Bachmann’s “I’m not a scientist, but someone told me” lie earlier this week about the HPV vaccine causing mental retardation. Note that there is NO evidence to support that claim, while there is overwhelming evidence that the vaccines are saving lives, but just as the climate change deniers won’t believe the vast preponderance of data with which scientists back up their claims while corporate interests produce phony proof from industry-paid “experts,” Shermer explains that there’s a political belief bias at work, as well.

Our discussion also touched on how Shermer converted from being a born-again Christian to an agnostic to an atheist as he learned more about science and rational thinking and whether Americans are more or less likely to believe nonsense than citizens of other countries. Finally, Shermer revealed what he was told backstage by the staff and host of “The Colbert Report” before his appearance this summer (his second time in that guest chair), and how Colbert’s show has become one of the premiere platforms for authors trying to sell books (along with “The Daily Show“).