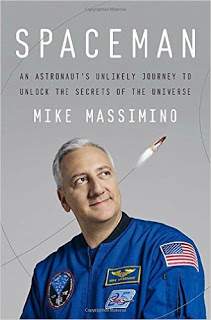 In the 1960s, as a small boy growing up on Long Island, I was obsessed with the early space programs, from Mercury to Gemini to Apollo. In late July, 1969, a few days before I turned eleven, Neil Armstrong and Buzz Aldrin became the first humans to walk on the moon. After watching it on TV, I went to bed looking out the window at the moon, amazed that there were people up there, and dreamt of becoming an astronaut. At the same time, a 6-year-old boy somewhere else on Long Island was doing the same thing and was similarly awed. The difference is that, unlike me, that boy grew up to actually become an astronaut.

Mike Massimino is a veteran of two space shuttle missions, was the first person to tweet from space, and has a recurring role on The Big Bang Theory, where he nicknamed Howard Wolowitz “Froot Loops.” Now he’s written about his life in a book called “Spaceman: An Astronaut’s Unlikely Journey To Unlock The Secrets Of The Universe.”

On my show, Mike talked about: