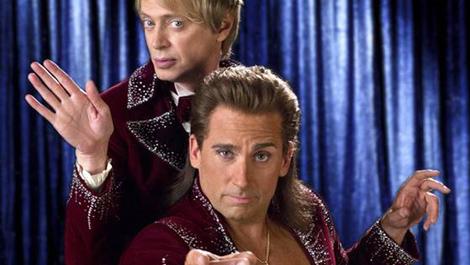 I’m often disappointed when movies I can’t stand have big opening weekends (e.g. “Oz The Great and Powerful” and “A Good Day To Die Hard,” which are both terrible — click those links for my reviews) while movies that I’ve enjoyed struggle at the box office. The latest in the latter category is “The Incredible Burt Wonderstone,” the first movie in a long time to make me laugh out loud.

Steve Carrell and Steve Buscemi play magicians in the Siegfried-and-Roy mold, who have been doing the same stale act on a Las Vegas stage for a decade. The routines never change, have no pizzazz, and aren’t pulling in a crowd any more.

I have witnessed this in person. While I never saw Siegfried and Roy, I did go to Lance Burton’s show at the Monte Carlo several times with different people, and while his close-up stuff was terrific and his rapport with young audience members was nice, the bigger illusions were all of the hey-it-disappeared-wait-it’s-over-there genre. David Copperfield suffers from the same problem — the grander the attempt, the less impressive — and the pasted-on smiles of the magical assistants didn’t help.

At the same time Carrell and Buscemi’s characters’ careers are waning, Jim Carrey’s is on the rise. He plays a street magician in the David Blaine/Criss Angel mold, with TV cameras following him as he performs in the midst of a crowd. Like Blaine, Carrey quickly moves from magic to exploits that aren’t illusions, but blatant publicity stunts. Carrey isn’t on camera a lot, and that’s a good thing, because it allows his character to be outrageous without wearing out his welcome. Where Blaine spent a week in an ice block or on top of a pole for TV specials, Carrey ramps things up by lying on a bed of hot coals overnight or going a week without urinating.

It’s also good to see Carrey being funny again. While he’s done some good dramatic work (“Truman Show,” “Man On The Moon”), this is a return to the Carrey of “Liar Liar” and “Ace Ventura,” and it’s refreshing to see. The “Incredible Burt Wonderstone” cast also includes Alan Arkin doing his usual solid supporting work (as a Harry Blackstone Jr. old-school magician who was Carrell’s hero as a boy), plus Olivia Wilde as the obligatory female sidekick/magical assistant and James Gandolfini as a casino boss.

It’s not a great movie, but for anyone who has seen too many guys in tuxedoes disappear from the stage only to re-appear in the midst of the audience, “Wonderstone” is funny and entertaining — and a helluva lot better than James Franco’s wizard.