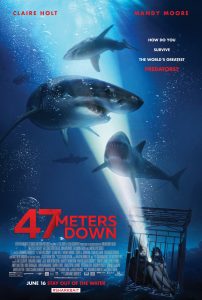 In “47 Meters Down,” Mandy Moore and Claire Holt play sisters on vacation at a resort in Mexico. They meet a couple of cute locals who convince them to go on an adventure (too bad they didn’t see “Snatched,” a cautionary tale about that). They agree to get on a boat captained by Matthew Modine, who will take them out into the part of the ocean that great white sharks call home. There, they’ll get into a shark cage wearing scuba gear and be lowered into the water for an up-close-and-personal view of the sharks and other fish in their native habitat.

The two guys go first, and come up reporting on the amazing sights they’ve seen. Then Claire (who’s been on several dives and is comfortable underwater) and Mandy (who has never been in scuba gear and is scared out of her mind) get in the cage, which is lowered five meters under the water. Sure enough, the sharks come by because the boat crew has been chumming the water, and the women get a good look at the beasts. But then, something goes wrong with the winch holding up the cage, which drops all the way to the ocean floor, 47 meters down.

That’s the setup for the suspense that’s supposed to come from whether the two sisters will be able to be rescued, or rescue themselves, before the air in their tanks runs out. Unfortunately, with everything that follows taking place down there, we’re left in a murky underwater scenario with serious lighting issues (I can’t even find a still photo from the production that’s bright enough to put at the top of this page!). There might have been a lot of tension if we could see the sharks in the distance coming for them, but we only get to see the animals when they’re right on top of our heroines. While that does create a couple of jump scares, it’s not enough to sustain the tension for the final hour.

Then there’s the problem of the ending. Writer/director Johannes Roberts must have felt his story wasn’t grabbing the audience enough, because he threw in a dumb twist in the last 5 minutes that was completely unnecessary. The audience that I saw the movie with actually laughed when it was over. It wasn’t giggling as a release a bunch of built-up tension — it was laughing at how stupid the end of the movie was.

Last year, I gave an 8 out of 10 to “The Shallows,” a movie in which surfer Blake Lively has to avoid being eaten by a great white shark, which was one of my Best Of 2016. Its story was much more compelling and the suspense seemed a lot more real compared to “47 Meters Down” which, despite running a mere 89 minutes, isn’t in the same league.

By the way, the original distributor of “47 Meters Down” must have known it was a dud, because it was destined to skip theaters and go right to video last August before another studio bought the rights and held it for a year before its theatrical release this summer. The delay didn’t make it any better.