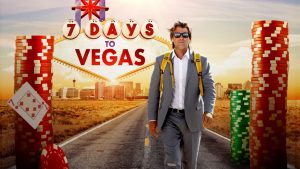 When I was at the Commerce Casino to play poker last February, I noticed a poster in the lobby for a movie called “7 Days To Vegas.” I recognized the guy in the photo as Vince Van Patten, co-host of the World Poker Tour broadcasts. I hadn’t heard a word about it, but made a mental note to find out more about the movie, then forgot about it until last week, when Van Patten’s longtime on-air partner, Mike Sexton, died after a battle with prostate cancer.

I first met Vince in 2004, when I was playing in a $40/80 limit hold’em game at The Mirage (in the days when it had a large, very popular poker room). Vince, his father Dick, and actor James Woods walked in and asked the floor guy standing near me to help them set up a high-stakes no-limit hold’em game. The supervisor said he’d put it on the board and make a few phone calls to get other players for the game. Meanwhile, there was an open seat at my table, so Vince sat down.

Over the course of about a half-hour, with Woods looking over his shoulder, Vince only played three hands, one of which was heads-up against me. To make a long story short, I won a total of $120 from him. Shortly thereafter, the floor guy came over to say the bigger game was ready, so Vince picked up his chips and headed to the other table. Before he could get there, I caught up with him to ask if he’d like to guest on my radio show to promote the WPT broadcasts. He said sure, and gave me his number, but we couldn’t make it happen for a few months. When he finally did, I recounted the Mirage story, and he responded by jokingly demanding a rematch. We then had a nice ten-minute conversation, which you can listen to here.

“7 Days To Vegas” was one of Vince’s passion projects. He co-wrote and produced the movie, in which he stars as Duke, an actor-turned-poker-player who runs a high-stakes game full of degenerate gamblers in Hollywood. They’re the kind of guys who will make proposition bets on anything. Last year, I wrote a piece about some that I’ve been involved in and others that I’ve witnessed (read it here). This is not an uncommon phenomenon around poker tables, which have been home to some outrageous bets over the years.

There was the guy who won $100,000 by getting 38C breast implants he had to keep for a year (I once sat next to him in a cash game well after the bet was over, and he still had the breasts — and horrible body odor). There was the guy who spent 30 days in a dark hotel bathroom to win a boatload of cash, another who bet he could eat $1,000 worth of McDonald’s food in 36 hours, another who won $300,000 by running 70 miles on a treadmill in 24 hours, and an infamous three-way “last-longer” bet in which whoever was knocked out of a tournament first had to get tattoos of the other two players’ faces.

The plot of “7 Days To Vegas” is based on a similarly ridiculous bet: how much would it take to get someone to walk from the San Fernando Valley to Las Vegas, a distance of about 280 miles? How about a million dollars? None of the players is willing to try it, until Duke’s financial situation changes. After winning so much money in the home games that he was burying bundles of cash in his backyard, he falls for a con man (John O’Hurley) who claims he’s gotten rich with his stock market picks. Duke gives him all his winnings, which then disappear when the guy’s Ponzi scheme is exposed.

Broke and desperate for money, Duke is provoked into taking the walking bet by Sebastian (Ross McCall), an obnoxious movie director who’s the other big winner in the home game. They set the conditions: Duke must walk to the Las Vegas sign in 7 days, wearing a suit but no hat, sleep outside, and take a short break every few hours in the air-conditioned RV that Sebastian and the other degenerates ride in to make sure Duke doesn’t call an Uber. Duke agrees, but wants 5-1 odds, meaning he’ll wager a million (put up by a friend) — but if he wins, he gets $5 million.

The film is populated by people who obviously know the world of poker, including cameos by Jennifer Tilly, Phil Laak, and Antonio Esfandiari. Van Patten’s real-life brother James (who also co-produced) plays Duke’s brother Carl, and there are supporting characters played by Paul Walter Hauser (“Richard Jewell”), Chad Lowe, and character actor Don Stark, who plays a guy who’s always pissed off and threatening violence, appropriately known as Angry Jim. Vince’s real-life wife, Eileen, plays Duke’s wife, who has to put up with an awful lot, just like the spouse of any degen.

“7 Days To Vegas” is by no means a great movie, but I enjoyed it more than I expected — partly because I’ve known so many of its characters, and partly because Van Patten comes off just as he does in real life, as a nice guy.