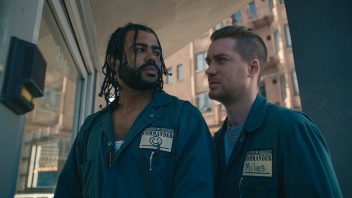 Daveed Diggs became a star in 2015 when he won a Grammy and a Tony for playing Marquis de Lafayette and Thomas Jefferson in the original cast of “Hamilton.” Since then, he’s gone on to a recurring role on “Black-ish” and a supporting part in the movie “Wonder” (which I reviewed here).

Through all of that, and for several years before, Diggs and his longtime best friend Rafael Casal have tried to get “Blindspotting” (which they wrote, produced, and star in) made. They finally did and, after creating some buzz on the festival circuit, it will hit theaters this weekend.

Diggs plays a thirty-something black man named Collin who, as the movie begins, is being released from a two-year stint in prison and sent to a halfway house to serve another year on probation. He seems like a man who’s been changed by the experience, and we’re quickly rooting for him to make it — but there are going to be some challenges. The biggest of those is Collin’s lifelong white friend Miles who, to prove his street cred, sports a grill on his teeth, tattoos all over his body, and a talent for smooth talk. The two work together as a team for a moving company, but while Collin is trying to steer clear of any trouble, Miles keeps dragging him into bad situations he doesn’t want to be in.

The drama in the movie comes from the fraught relationship between black men and cops in modern-day America, and the fear the former feels while walking along on the sidewalk at night and a police car pulls up.

One night while Collin is driving the truck home, he’s stopped at a red light that takes forever to turn green. There are no other vehicles around, and you can see in his face that Collin wants to hit the gas because he’s nervous about getting back to the halfway house before the 11pm curfew, but he knows that he can’t afford to be pulled over for running the light. Then, just as the light turns green and he’s about to go, another young black guy darts out in front of the truck. He and Collin recognize each other for a moment before the guy runs around the truck and down the middle of the street behind Collin. Two seconds behind him is a white cop, chasing the black guy and ordering him to stop. When he doesn’t, the cop pulls his weapon and fires four shots from about 20 yards away.

The black guy is dead. The white cop is right outside Collin’s driver-side window. They look at each other, frozen in the moment. Then another cop pulls up and orders Collin to get the truck out of there. Collin drives away, but is confused about what he should do about what he just witnessed without risking a return to prison. The memory of that moment comes back to him repeatedly throughout the movie, and plays a big part in the very tense climactic scene. I won’t give it away, but it contains some of the most passionate writing — much of it in verse — I’ve seen in a long time.

Combined with the lighter elements of the movie, some of which are very funny, I found myself wondering what this strange mix of drama and comedy was. The best analogy I can offer is a mix of “Barbershop” and “Boyz In The Hood.”

The script touches on racism and gentrification, as well as subplots involving Miles’ girlfriend and son, Collin’s ex, and a gun dealer who’s also an Uber driver. There are parts for which I, a middle-aged white man, could have used subtitles — or a translator like Barbara Billingsley in “Airplane” — particularly when Miles, conversant in street lingo, is trying to sell a sailboat they’ve found to a passing driver.

Throughout, Diggs and Casal relate to each other like two guys who’ve known each other for a long time, and that’s what makes the movie work.

“Blindspotting” is timely, amusing, gut-wrenching, and thought-provoking. I give it a 7.5 out of 10.