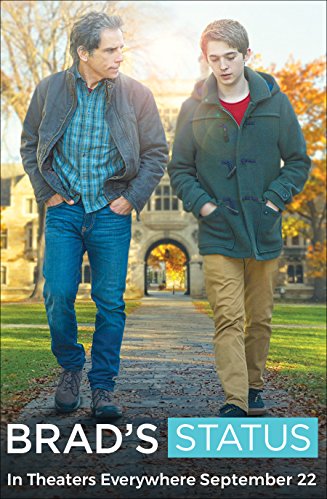 I’m not a Ben Stiller fan. I can’t stand the characters he’s played in “Zoolander,” “Dodgeball,” and the “Meet The Parents” movies. Those over-the-top scenery-chewing roles turn me off, no matter how many times he keeps playing them. But finally, he’s done something different.

In “Brad’s Status,” Stiller plays the title character, a guy who runs a non-profit in Sacramento and has a pretty good middle-class life. His wife (Jenna Fischer) works for the state government and his son Troy (Austin Abrams) is a high school senior with good grades. But Brad is racked with jealousy over the success of the guys he went to school with. Jason (Luke Wilson) runs a successful hedge-fund, complete with a private jet and a beautiful wife. Craig (Michael Sheen) used to work in the White House, wrote a best-selling book, and is in-demand as a TV pundit. Nick (Mike White) is a movie director so famous his house was featured in an architectural magazine. Billy (Jemaine Clement) made a fortune in tech and now lives on a beach in Hawaii with two hot young women.

As Brad takes his son to visit colleges in the Boston area, he wonders where he went wrong. Why doesn’t he have a private jet, or even an airline club card that lets him board the plane first? Why did he go to Tufts when it looks like his son might get into Harvard? How did he get left behind in the social hierarchy? Yes, he’s suffering from a severe case of white male privilege, but can’t stop wondering how it’s fair that his friends have so much more than he does.

Stiller embodies this persona perfectly, and has a wonderful scene with an actress named Shazi Raja, who I think we’ll see a lot more of after this performance. She plays a Harvard undergrad who knew Troy in high school and meets both son and father over drinks, where Brad is taken with how smart and funny she is. There’s no romance there — in fact, Brad’s only thoughts are “why didn’t I meet someone like this when I was in college? — but after he pours out his angst to her, she doesn’t give him the reaction he expects.

That dialogue was written by Mike White, who not only appears in the movie, but also wrote and directed it. White was also responsible for “School Of Rock,” the hit Jack Black movie that became both a TV series and a Broadway musical, as well one of Jennifer Aniston’s best movies, “The Good Girl.” You may have also seen White traveling the world with his father on “The Amazing Race.”

In “Brad’s Status,” White keeps the camera tight on Stiller in some scenes so we can see every nuance of anxiety on his face. In others, he pulls back just enough to show us the relationship Brad has with his son, his wife, and the other people in his world. All of it gives us some perspective on his life, and perhaps, ours.

Considering I haven’t liked Ben Stiller since “Flirting With Disaster” more than 20 years ago, I’m surprised to find him in a movie that will probably be on my Best Of 2017 list.