Movie Review: “Can You Ever Forgive Me?” 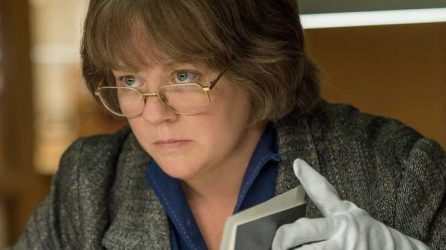 I’m not a fan of most Melissa McCarthy movies. Like Will Ferrell’s work, much of it doesn’t appeal to me. However, I really liked it when Ferrell went the dramatic route in “Stranger Than Fiction” (review here), which is on my Movies You Might Not Know list. In fact, the only things I’ve liked McCarthy in were a non-comedic supporting role in the Bill Murray movie “St. Vincent,” as part of the ensemble in the female “Ghostbusters” remake, and her stints as Trump press secretary Sean Spicer on “Saturday Night Live.”

McCarthy’s new one, “Can You Ever Forgive Me?” gives her a chance to stretch her acting muscles quite a bit, and she’s fully up to it. The movie is based on the story of Lee Israel who, in 1991, was a down-on-her-luck author with biographies of Katherine Hepburn, Tallulah Bankhead, and Estee Lauder to her credit — but nothing since. She had sunk into alcoholism and couldn’t even get her agent to return her calls. Desperate for money, she began forging letters by literary giants of an earlier era (e.g. Noel Coward, Dorothy Parker, Lillian Hellman), which she sold to local bookstores and collectibles dealers for cash.

Downplaying her comedic side, McCarthy is terrific as Israel, a woman most people found unpleasant to be around (she felt the same about them). The exception was Jack Hock, a fellow alcoholic and bottom-dweller, up for anything except having a fixed address. He’s played beautifully by Richard E. Grant, a character actor you’ve seen in dozens of movies and TV shows. Their chemistry drives the story as much as Israel’s scheme, in which Hock is a willing accomplice.

Israel wrote about her exploits in a 2008 memoir which engendered some controversy because she profited from her criminal story. She won’t get a piece of the movie because she died in 2014, before it got off the ground. But those who read her work say she had a real knack for writing, and that her forgeries were more entertaining than some of the authentic letters written by those she imitated.

The story of “Can You Ever Forgive Me?” takes place in another era, before Amazon.com, when neighborhood bookstores still thrived, places you could walk into and browse to your heart’s content, inhaling the aroma of musty hardcovers by writers of every genre. It was also a time when personal computers were not commonplace in American homes yet, although I’d been online for five years by then, in a monochromatic pre-world-wide-web world. Accordingly, since there was no easy way to change fonts, Israel amassed quite a collection of vintage manual typewriters, which allowed her a variety of typefaces to work with in making her forgeries look more realistic.

The script, based on Israel’s book, was written by Jeff Whitty (a name that could be either a boon or a curse to a writer) and Nicole Holofcener, whose earlier work I’ve admired — particularly a 2013 movie called “Enough Said,” with Julia Louis-Dreyfus and James Gandolfini in one of his last roles. Holofcener was originally set to direct “Can You Ever Forgive Me?” but when production was delayed amidst cast changes, she handed the reins to relative newcomer Marielle Heller, who captures just the right tone and pacing, and allows McCarthy to show off her dramatic chops.

The supporting cast of “Can You Ever Forgive Me?” includes Jane Curtin — so good! — in two wonderful scenes as Israel’s agent, Marjorie, who couldn’t get her a deal because no publishing house cared about the subjects she wanted to pursue. Anna Deavere Smith has a small role as an old friend of Israel’s, too.

Fans of McCarthy’s earlier work in broad comedies like “Bridesmaids,” “The Heat,” and “Tammy” may be disappointed that she’s trying something different here, but I’m always happy to see a movie about an original character that’s told well. “Can You Ever Forgive Me?” certainly fits that description.

It also means I finally liked a Melissa McCarthy movie. I rate “Can You Ever Forgive Me?” an 8 out of 10.

P.S. My wife and I got a real kick out of one scene because it takes place in a restaurant we both recognized, John’s of 12th Street. We have eaten there several times on our trips to New York, as it is our daughter’s favorite Italian place in the city, with both vegan and non-vegan menus — and the items on both are quite delicious.