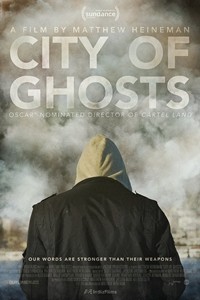 “City Of Ghosts” is a documentary about men from Raqqa, Syria — Mohamad, Hamoud, and Aziz — who were so appalled by what was happening to their hometown that they began to document it online, becoming citizen journalists.

Using the name, “Raqqa is Being Slaughtered Silently” they cover the Isis takeover of their hometown and the attacks on Syrians by the forces of President Bashar al-Assad. They work to get video of various atrocities online for the world to see, from a place so dangerous there are no outside news organizations covering the plight of its people.

The movie’s director, Matthew Heineman, mixes uploaded RBSS video with his own footage, shot from the Arab Spring in 2011 through 2015. He follows the men as they are forced to leave Syria and set up their operation elsewhere, using satellite dishes and cell phones to transmit their video to the world. There are some gruesome scenes, including men being shot in the head at point blank range, and others with heads that have been chopped off of bodies stuck on fenceposts.

“City Of Ghosts” is well-made, and I give Heineman credit for telling the story of these men, who deserve attention and admiration. The problem with the film is it has no resolution, just like the situation in Raqqa, which remains fluid and horrible. As much as you might sympathize with and root for Mohamad, Hamoud, and Aziz as they do their work as citizen journalists, you’re left with nothing but remorse at the end.