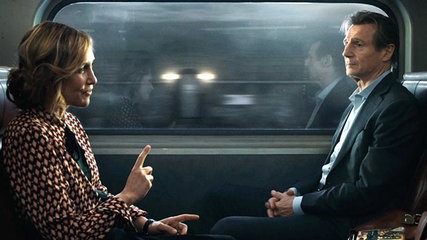 When I walked out of a packed screening of Liam Neeson’s latest action movie, “The Commuter,” there were two groups of people in the lobby: regular people buzzing with excitement and a group of critics grousing about having to sit through it. That’s because the latter group went in with their expectations bar set too high, perhaps because they’ve been exposed to so many award contenders in the last few weeks. Meanwhile, the non-critics went in hoping for a fun popcorn movie, nothing more, and that’s exactly what they got.

At 65, Liam Neeson has probably reached the age where he should stop making movies like this (who does he think he is, Harrison Ford?), but he’s still believable as the everyman who gets caught up in a situation beyond his control. This time, Neeson plays Michael Macauley, an ex-cop who, for the last decade, has been commuting by train to his job in midtown Manhattan as an insurance salesman.

It’s the same routine every day, until he’s called into the boss’ office and unceremoniously fired. Deciding not to tell his wife over the phone, he goes to a local bar to have a couple of beers and commiserate with his former police partner (Patrick Wilson), then gets on the train home. That’s where he’s approached by a woman he’s never met before (Vera Farmiga, who should be getting better roles by now) who engages him in small talk and then asks him a hypothetical question: would you carry out a single act that has no effect on you, and only has ramifications for a stranger, for $100,000?

Since Michael’s just lost his job and has to pay not only his mortgage and bills but his son’s upcoming college tuition, he’s intrigued — until he finds out the question wasn’t so hypothetical. He’s caught up in something very dangerous, and lives are on the line unless he can identify someone on the train and tag them with a GPS device. The premise may be thin, but it’s enough to draw us in as Neeson pulls out his usual combination of bravery and brains to figure out what’s really going on while eyeing everyone else on the commuter train to see who might be the target.

Director Jaume Collet-Saura, who made the similar Neeson adventure-on-an-airplane movie “Non-Stop” — as well as the 2016 Blake Lively vs. shark thriller “The Shallows” (here’s my review) — keeps the suspense taut, although there are several sequences that are tough to accept. For instance, in one fight, a woman sprays mace in Neeson’s face, but two seconds later, he’s fine, no after-effects. Then there are the usual hand-to-hand brawls with enough punches and kicks to disable a normal human being, but not our hero. In that regard, “The Commuter” felt to me sorta like “Die Hard 3.” Still, I was willing to suspend disbelief and go along for the ride, just as I do for any other movie from this genre (I’m talking about you, James Bond).

Unfortunately, Jonathan Banks isn’t given much to do as a fellow commuter Neeson befriended on their daily trips over many years. Neither are Elizabeth McGovern, given the thankless role of Neeson’s barely-seen wife, and Sam Neill, as his former boss on the police force (a role that looks like it may have been larger originally, but ended up on the cutting room floor).

If you keep your expectations low — and don’t question how Farmiga’s character knows everything that happens on the train after she gets off it — “The Commuter” meets them. It’s not horrible, it’s not great, it’s probably not going to do a lot at the box office, but I bet it runs on cable and streaming services for years.