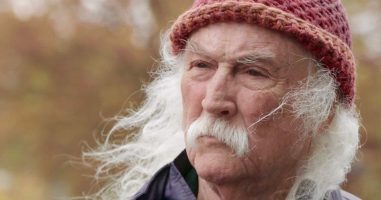 I have interviewed rock legends Roger McGuinn and Graham Nash many, many times. They both were always cooperative, easy to get along with, and a pleasure to talk to — the kind of guys about whom you’d think if they don’t get along with someone, it’s gotta be the other guy’s fault. Well, if the other guy is David Crosby, it certainly is. Not only has he pissed off McGuinn and Nash, but Stephen Stills, Neil Young, and Chris Hillman, too — all the musicians/singers/songwriters he’s worked closely with over the years.

That’s not my judgment. Crosby admits to the animosity from his former colleagues, and more, in a new documentary about his life, “David Crosby: Remember My Name,” from director AJ Eaton and producer Cameron Crowe. The latter serves as the interviewer digging into Crosby’s brain to get him to tell some stories.

They range from his childhood to his work with McGuinn and Hillman in The Byrds to the house where Crosby says CSN was formed “in forty seconds” after the three of them harmonized together. He tells stories about Woodstock and Laurel Canyon. He talks about drugs a lot, including marijuana, LSD, and his addictions to cocaine and heroin that not only sent him to prison for several years, but also nearly killed him and his girlfriend (now wife), Jan.

The movie starts with the claim that “David Crosby has been in the forefront of rock stardom for 50 years.” That’s an enormous exaggeration. The last time he had a hit was the CSN album “Daylight Again,” released in the summer of 1982 (with tunes like “”Southern Cross,” and “Wasted On The Way,” written by Stills and Nash, respectively). He does still tour, and the movie follows him to a few venues (I reviewed his recent appearance in St. Louis here), where he’s backed by younger musicians, including his son. He also has made four albums of new material in the last several years, but none of it is particularly memorable. I’ve listened to all of them a few times and can’t tell you the name of a single song or remember any of the lyrics.

It would be more accurate to say that David Crosby has somehow survived for 50 years. He has been near death several times, needing a liver transplant, eight stents in his heart, and insulin for his diabetes. In the documentary, he openly ponders why he’s still alive, considering that he abused his body in much the same way Janis Joplin, Jimi Hendrix, and Cass Elliott did.

There’s no denying that Crosby has earned a place in rock and roll history, having been inducted twice into the Rock And Roll Hall Of Fame (with the Byrds and CSN), but he’s also done and said terrible things to the people closest to him, in many cases pushing them away forever. The only member of his family interviewed in the movie is Jan, but there’s no mention at all of his three other children, nor the one he fathered as a favor to Melissa Etheridge and her partner Julie Cypher.

“David Crosby: Remember My Name” is by no means a white-washing of the man’s life, nor an apology to those he’s wronged. It’s a warts-and-all look at a very flawed man who happened to have a remarkable voice. Whether it’s worth spending ninety minutes with him is up to you, but I get the feeling it’s better to do so from a distance.