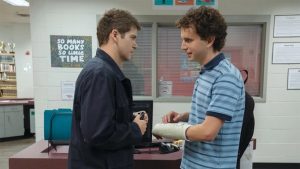 Lies, lies, lies, lies. If the past few years have taught us anything, it’s the danger of spouting falsehoods. They have not only infected our political discourse to an even greater extent, but they have slowed the march towards herd immunity during a pandemic that has killed nearly 700,000 in the US alone.

That’s one of many reasons “Dear Evan Hansen” bothered me. At the heart of its plot is a white lie told by Evan, an awkward high school student, in an attempt to soften the sadness of the parents of another student, Connor, who committed suicide. But that’s not all. Evan doubles down on that lie, then piles more falsehoods on top of it. Doing so makes him popular at school, with Connor’s parents, and with Connor’s sister, Zoe.

If that sounds to you like an unlikely scenario for a feel-good musical, you’re absolutely right. The question I kept asking while watching “Dear Evan Hansen” was, “Where’s the fun?” Even musicals full of conflict and tragedy (e.g. “West Side Story,” “Fiddler On The Roof”) have scenes that put a smile on your face, with songs you can’t forget on your way out of the theater. “Dear Evan Hansen” has none of that. Worse, it starts as a story rooted in mental health issues, but those are quickly forgotten in the midst of family problems, single mother matters, a teen romance, and the fabrication that spins out of control.

Ben Platt won a Tony Award for playing Evan on Broadway in 2017 and reprises the role in the movie, so he’s uber-comfortable in the role. There have been some squawks about Platt being in his late twenties while playing a high schooler, but that didn’t bother me because I’m able to suspend disbelief while watching a movie. That’s why I never had a problem with — as just one example — 30-year-old Dustin Hoffman playing recent college graduate Benjamin Braddock in “The Graduate,” nor with Anne Bancroft playing middle-aged Mrs. Robinson despite being a mere 6 years older than Hoffman.

So it wasn’t Platt’s age that bothered me in “Dear Evan Hansen.” It was more his tendency while singing to shift his voice up into what I call the Josh Groban range, a near-falsetto Platt uses on certain words and phrases. Used sparingly, it would only be mildly annoying — but Platt does it in every song. His female costars — Julianne Moore, Kaitlyn Dever, Amandla Stenberg, Amy Adams — all provide richer performances than Platt and, despite not being professional singers, are more pleasant to listen to.

It’s a shame the songs are not more memorable, considering they were written by Benj Pasek and Justin Paul, who also wrote the tunes for “La La Land,” a far superior musical. By the way, that movie had its downbeat moments, too, but they weren’t allowed to drag the whole thing into a rut the way “Dear Evan Hansen” does. Worse, it stays in that rut for 137 minutes, which might be an acceptable running time on Broadway, but it’s too long for a movie — especially one full of desperate attempts to create viral moments that tug at our hearts without trying to put smiles on our faces.

Some of the blame for that has to go to director Stephen Chobsky, who does a fine job opening up the action so it no longer looks like a stage musical, but adds several montages that do nothing to advance the story. Oddly, he also allows background actors to completely ignore characters who break out into song (in the high school hallways and elsewhere), thus missing another opportunity to build connections as Evan’s popularity and confidence rise. The result is a fake feeling that, ironically, fits right in with the deceptions that propel the story.

I give “Dear Evan Hansen” a 3 out of 10. And that’s the truth. Now playing in theaters.