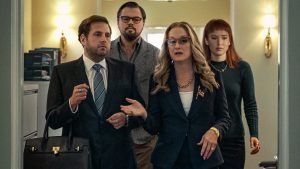 In 2006, Mike Judge made a little-seen movie called “Idiocracy,” about a man who’s put into hibernation for a year, but ends up staying asleep for 500 years. When he wakes up, the world is so full of morons — not just the average person, but political leaders, media figures, and everyone else — that he’s immediately recognized as the smartest human on Earth. At the time “Idiocracy” was released, it seemed to project a reality that was way off in the future. Then the Trump era rolled around, and we got there in just a decade.

What made “Idiocracy” work was that it was genuinely funny. Oh, sure, Judge went for cheap laughs along the way, but he had some really clever stuff that, in hindsight, seems prescient. If only the same could be said for “Don’t Look Up.”

Adam McKay, who turned the housing crisis into a brilliant dark comedy called “The Big Short,” fails horribly with “Don’t Look Up” because he forgot the funny. Humor is a vital element in great satire, from “Dr. Strangelove” to the “Borat” movies to “Thank You For Smoking” to “Wag The Dog.” This is not the first time McKay has failed with topical material. I hated his Dick Cheney movie, “Vice,” too.

“Don’t Look Up” is an allegory about climate change and the way it’s been ignored by people who have the power to do something about it but have manipulated public opinion so much it’s not even considered a crisis worth our attention. In this case, the problem isn’t global warming, but a comet that’s headed in Earth’s direction and is big enough to be considered a “planet killer,” meaning it will pale in comparison to the meteor that killed off the dinosaurs millions of years ago.

The comet is discovered by two astronomers (Jennifer Lawrence and Leonardo DiCaprio) who try to warn the world but can’t get anyone to take them seriously. That includes the American president (Meryl Streep), her obsequious son/chief of staff (Jonah Hill), the stars of a top morning TV show (Cate Blanchett and Tyler Perry), and the vast majority of everyday people, who are much more interested in the relationship between two young music stars than their imminent deaths.

That could have worked if McKay played it straight, as Stanley Kubrick did with “Dr. Strangelove,” but McKay is so intent on getting his message across that he keeps hitting us over the head with it. There are comet deniers, media liars, and literal fires along the way, but none of it adds up to much. I can honestly say that while enduring the 2+ hours of “Don’t Look Up,” there wasn’t a single moment that made me crack even a tiny smile.

It’s a shame because McKay assembled quite an ensemble, including Mark Rylance, Timothée Chalamet, Rob Morgan, Paul Guilfoyle, Ron Perlman, Ariana Grande, Himesh Patel, Melanie Lynskey, Michael Chiklis, Ashleigh Banfield, and Sarah Silverman. Every one of them does their best, but the material fails them, and the blame for that must go right back to McKay. It’s as if he’d devised a story about a movie headed to your screen that wipes out everyone associated with it. Although Meryl and Leo and a few of the other actors will certainly survive, “Don’t Look Up” doesn’t do much to return Jennifer Lawrence to the pantheon of stars whose movies create positive buzz.