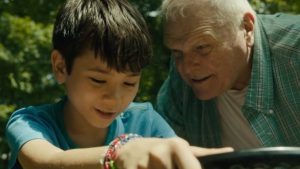 “Driveways” is a sweet, but sad, story that marks the final film performance by the great Brian Dennehy, who died in April at 81.

He plays a lonely widower named Del, the next-door neighbor to a woman named April, who died before the movie’s story began. Her sister, Cathy, a single mom struggling to get by on her salary as a medical transcriptionist, drives across the country with her 8-year-old son Cody to clean out April’s house and get it ready to be sold. When she arrives, Cathy discovers that her sister was a hoarder, so she has quite a challenge ahead.

Cody is a shy, sensitive boy who makes a connection with Del that helps them both blossom as their easy friendship grows. Cathy has some trepidation about this next-door stranger, but prefers him to the roughhousing grandsons of another neighbor down the street. As she watches Cody become less reliant on his favorite video game and more open to human interaction, she slowly develops her own friendship with Del amid the burden of cleaning up the mess April left behind.

Cathy is played by Hong Chau, who was so good in the second season of “Homecoming” on Amazon Prime Video. Lucas Jaye really shines as Cody, thanks to a great script by Hannah Bos and Paul Thureen and direction by Andrew Ahn. It’s one of the most naturally charming performances I’ve seen by a child actor in quite a while.

As for Dennehy, he’s as wonderful here as ever, although much more fragile than the big, strong man he portrayed in his dozens of other movies and stage roles. He gives Del real warmth, not just with Cathy and Cody, but also with his bingo-playing buddies at the VFW, including best friend Rodger (Jerry Adler).

In the film’s last ten minutes, Dennehy gets an extended speech in which he tells Cody some of his memories. Martha and I both teared up watching him, not only for the way he delivers it, but with the knowledge this would be the last thing we ever see him do. It’s a fitting end to a long career full of so many indelible characters portrayed so well.

If you’re looking for a nice, quiet drama whose only fireworks come from those boys down the street, I recommend “Driveways,” which is now available via video-on-demand. I give it a 9 out of 10.