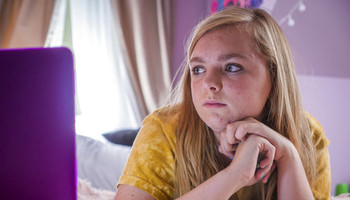 Kayla is a thirteen-year-old girl entering her last week of eighth grade. She’s shy, quiet, desperate to be popular, wants to have a boyfriend, doesn’t know what that entails, and hasn’t dated yet. She’s a jumble of pimples, anxiety, insecurities, and is obsessed with social media. She’s constantly checking her phone, taking selfies, and browsing through Instagram and Snapchat to see what her peers are up to and what she’s missing out on. Meanwhile, she makes affirmational YouTube videos with tips for kids her age (“Be yourself, and don’t care what other people think about you”) — advice she doesn’t put into practice.

The movie’s writer/director, Bo Burnham, knows something about YouTube because he started making song parody videos when he was 16 and became an online star as many of them went viral. That led to a Comedy Central special, which he followed up with a Netflix special, which opened up the opportunity to make “Eighth Grade.” Now 27 years old, he’s combined his own teen experiences with stories he heard from girls Kayla’s age as he did research for his script. The result is a movie that is funny, touching, engaging, and empathetic.

Elsie Fisher is perfect as she captures the essence and unease of Kayla’s life, particularly in one scene where she’s invited to the pool party of the one of the school’s most popular girls — not by the girl, but by her mother. When Kayla shows up and changes into her one-piece swimsuit in a bathroom, she emerges with a look of abject terror on her face as she makes her way through the crowd, which mostly ignores her. It’s a bold move by Kayla, but oh, the nerves are working overtime, and Fisher’s portrayal is heart-breaking and amusing at the same time.

I couldn’t help but think that Kayla is the girl who grows up to be Stacy, the Jennifer Jason Leigh character in “Fast Times At Ridgemont High,” but without Phoebe Cates as her best friend. Like that movie, “Eighth Grade” has a scene set in a mall, and there are boy issues, too.

Josh Hamilton is very relatable as Kayla’s father, who loves her a lot and wants to talk to her about what’s going on in her life but can’t find a way to connect because she thinks he’s uncool and dorky. Besides, she’s constantly plugged into her phone. In other words, he’s me eleven years ago when my daughter was Kayla’s age.

But I could also relate to Kayla because I was so much like her at that age. We didn’t have the internet or smartphones, but we did have many of the same teenage anxieties, school cliques, the horrors of puberty, and the desire for friendship. Those are universal themes for most suburban kids, which Burnham and his talented cast of unknowns portray incredibly well.

“Eighth Grade” will be on my Best Of 2018 list. It’s a home run first-feature-film that has me looking forward to whatever Burnham and Fisher do next.