Movie Review: The Girl On The Train 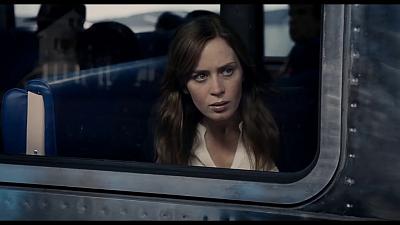 Playing a drunk character onstage or in a movie can be difficult. For an amateur, it means staggering around, slurring your words, and acting goofy. A professional has to avoid those stereotypes and realize there are several different levels of drunk: 1) slightly buzzed after a couple of drinks; 2) acting irresponsibly after too many drinks; 3) on the verge of falling-down or blacking-out after losing track of how many drinks; 4) appearing somewhat normal and able to make it through the day while totally smashed; 5) seriously alcoholic and apparent to everyone.

Emily Blunt is not an alcoholic, but she plays one as Rachel, the title character who lives somewhere in the 4-5 range of drunk, in “The Girl On The Train,” a mystery thriller based on the huge best-seller by Paula Hawkins. Blunt is a very talented actress, and she gets the drunk right. Her Rachel is pretty much blotto all the time, but tries her best to disguise it, drinking vodka from a plastic water bottle she carries as she commutes into and out of New York City, living in a fuzzy world somewhere between reality and absolute confusion.

On the train, Rachel stares out the window at the houses passing by, particularly those in a neighborhood she used to live in. Rachel is still psychologically devastated by the dissolution of her marriage to Tom (Justin Theroux) who still lives in her old house with his new wife Anna (Rebecca Ferguson) and their baby. She can’t help but look to see what’s going on for a few seconds in each direction each day. Rachel is also taken with the couple that lives two doors down — Scott and Megan (Haley Bennett), the latter of whom is frequently on the deck of her house overlooking the train tracks.

We see all of this through Rachel’s booze-riddled disorientation, and the setup takes a little bit too long before we get to the actual mystery. That starts rolling when, shortly after Rachel sees Megan kissing a man who is definitely not her husband, she goes missing. That sets off a mystery that Rachel investigates — or is she involved? Alison Janney plays a police detective trying to unravel the foggy memories and lies. The cast also includes Laura Prepon and Lisa Kudrow as the kind of characters inserted solely to advance the exposition of the plot so that the audience can follow the twists and turns.

Interesting side note: before Kudrow was cast, her character’s name was Monica. But then director Tate Taylor (“The Help,” “Get On Up”) realized that having women named Rachel and Monica, with one of them played by an ex-star of “Friends,” would be too distracting for his movie. He wisely renamed Kudrow’s character Martha (a much nicer name!).

As I said, “The Girl On The Train” is pretty slow going for the first 45 minutes or so, but then plot details are revealed (which I won’t spoil) that help pick up the pace and it races towards a satisfying conclusion. It has been compared to “Gone Girl,” and they do have a couple of things in common: they’re both about suburban wives who suddenly go missing, and they both refer to their lead characters as “girl” when, in the 21st century, she should really be called a “woman.”

My wife, who read the book and thus knew what was coming, walked out happy. I didn’t read the book, but felt satisfied on the way out, too. I’m giving “The Girl On The Train” an 8 out of 10.