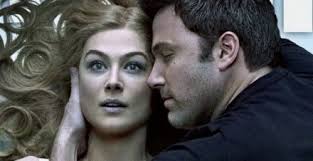 In “Gone Girl,” Ben Affleck’s wife, Rosamund Pike, disappears on their 5th anniversary. Their marriage has been going through a rough time, but he has no idea what happened to her. When cops investigate, they begin to think that he killed her and tossed her body somewhere. Then cable news gets into the act, with a Nancy Grace-like character (played perfectly by Missi Pyle) turning it into a witch hunt. To tell you anything else about the plot would spoil it — although millions of people read Gillian Flynn’s novel, so they already know where it goes. My wife was one of them, and she’s always leery of movies based on books she enjoyed, but her verdict was that the film version (with Flynn’s screenplay) is at least as good as the printed one.

Affleck and Pike are perfect for their roles, both chilling in their calmness. So is the supporting cast, which includes Neil Patrick Harris, Tyler Perry, Patrick Fugit (the kid from “Almost Famous”), David Clennon, Sela Ward, and a star-making turn by Kim Dickens as the detective investigating the disappearance. Director David Fincher (“House of Cards,” “The Social Network,” “Benjamin Button,” “Panic Room,” “Fight Club,” “The Game,” and “Seven”) keeps the proceedings tight without losing any of the suspense. I didn’t even realize until it ended that “Gone Girl” lasts almost two-and-a-half hours; it’s that gripping. But I will warn you that this is not a first-date movie (unless you’re the twisted type whose relationship was kick-started by “Fatal Attraction”).

I give “Gone Girl” a 9 out of 10 rating — it’s one of the best of the year. It’s going to launch Pike’s career to the next level and is confirmation that Affleck can do great work when he has the right material.

I tried not to read anything about the movie until I saw it, but afterwards, I read a New York Times story in which Affleck says the only argument he had with Fincher during filming was about a scene where his character puts on a baseball hat in the hopes he won’t be recognized.

Fincher wanted him to wear a Yankees cap, but Affleck, a Red Sox fan, “would have none of it.” “I said, ‘David, I love you, I would do anything for you, but I will not wear a Yankees hat. I just can’t. I can’t wear it, because it’s going to become a thing, David. I will never hear the end of it. I can’t do it.’ And I couldn’t put it on my head.” In the end, they compromised; Affleck wore a Mets hat during the scene.