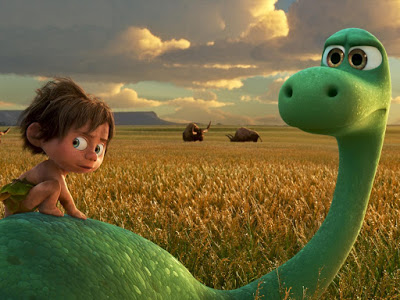 Since “Toy Story” debuted 20 years ago this month, Pixar has produced a remarkable string of quality movies that translated into box office gold. “The Good Dinosaur” will no doubt continue that money-making tradition, but the differences from its predecessors are glaring.

First and foremost is the story, which has always been at the heart of Pixar’s best projects. This one seems like a re-tread. The basic plot is about Arlo, the smallest member of a dinosaur family, who has to prove himself worthy of leaving his mark on the world, literally.

I had a problem with “The Good Dinosaur” from its first scene, which imagines that the asteroid that crashed into Earth 65 million years ago and led to the extinction of life (including dinosaurs) actually missed our planet. Thus the dinosaurs lived, and as they evolved over several million more years, they learned to speak, use tools, and farm their own crops.

Okay, this isn’t the first time Pixar has anthropomorphized its animal characters — from “A Bug’s Life” to “Ratatouille,” we’ve seen it before — but what bothers me is that, later in the story, a human character is introduced, first as the antagonist to Arlo and then as his best friend. I worry that kids who see “The Good Dinosaur” will walk out not understanding the alternate-reality of the movie’s initial premise, but instead believing that dinosaurs and humans were, in fact, once on Earth at the same time. Call this The Flintstones Fallacy.

Come to think of it, why limit this concern to kids? I’ll bet that, in a country where Donald Trump’s brazen lies and internet rumors are accepted as fact by too many Americans, a large number of adults who see this movie will later cite it as proof that the two species roamed our land masses simultaneously. And that’s not good.

At the screening I attended, a lot of people brought their young children, for whom this movie is the target demo. In its past successes, Pixar has always been able to balance the kid-appeal with the adult-appeal, so that both can enjoy the movies on their own levels. “The Good Dinosaur” doesn’t have that magic — and more than any of its animated ancestors, it’s likely to inspire some nightmares for young viewers.

A big part of that comes from a classic animated movie device. As in “Bambi,” “The Lion King,” “Finding Nemo” and others, the plot is kicked into high gear by the turbulent death of a parent. Scary scenes aren’t enough of a reason to condemn a movie — hell, I hid under the bed when the flying monkeys appeared in “The Wizard Of Oz” until I was about 15 — but if you don’t know they’re coming in this one, you’re going to have to do a lot of cuddling to get your kid over some of the scenes in “The Good Dinosaur.”

Also setting it apart from Pixar precedents was that when “The Good Dinosaur” ended and the credits rolled, there was not much applause from the kids (or adults) in attendance, and no one seemed especially thrilled on the way out. That could mean some mediocre word-of-mouth, which would affect not only the box office (as it did with “Monsters University”), but the later sales of DVDs and downloads, which are usually driven by children who want to see a movie again and again.