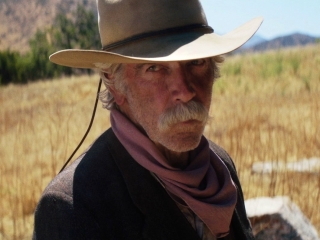 In “The Hero,” Sam Elliott still looks as rugged has he ever did and he still has that great deep voice. He plays Lee Hayden, an actor who had a movie career that included one big hit, but now he’s not getting any parts, so he does a lot of voiceover work.

The movie starts with Lee in a studio, recording a tag line for a Lonestar Barbecue Sauce commercial. He reads it perfectly, but an unseen ad agency guy asks him to do another take. He nails it again, but is forced to do take after take. I completely related to this because many years ago, when I did some commercial voice work, I had the exact same experience. No ad agency producer ever believes that the talent can get it right in a single take, so we’re forced to do the same thing over and over, often with no specific direction about how they’d like it changed. It’s frustrating as hell — particularly when you know they’re going to end up using Take One — and you can see it in Elliott’s face in that scene.

That’s a good start for the movie. Unfortunately it doesn’t go too far down the line from there.

Laura Prepon plays a woman half his age who he meets through his drug dealer/longtime friend, Nick Offerman (the scenes with the two men are the best in the movie). When Prepon gets involved with Sam, she tells him she is a standup comedian, and I wince because of my Actors Playing Comics rule. Sure enough, there’s a scene in a comedy club where we see Ali Wong, an actual standup (with a Netflix special and everything), doing her professional comedian thing onstage. Then Prepon follows, and it’s not good, unless you like women in the thirties joking about the testicles of men in their seventies. It’s not entirely Prepon’s fault, as she didn’t write the material (blame director Brett Haley, who also did the screenplay), but like so many others who have tried, she doesn’t have the timing, rhythm, or voice of anyone who has made it beyond a comedy club’s open mike night.

The cast of “The Hero” includes Max Gail as the head of a Western movie fan club that honors Lee with a lifetime achievement award, Katherine Ross (Elliott’s real-life wife) plays his ex, and Krysten Rytter is the daughter he is estranged from. They’re given virtually nothing to do except frown whenever he shows up.

“The Hero” is about a guy who is at the end of his career, alone and unhappy in a life going nowhere. Sadly, neither is the movie. There are flashbacks to the film that made Lee famous, but they offer nothing to make us understand what he did that made it so popular. That’s the problem for “The Hero” — it keeps teasing us about his past, but sticking us with multiple scenes in the present showing Lee grimacing and not much more.

The good news is it’s only 90 minutes. The bad news is it’s not even worth that much of your time. It is not horrible, but it is disappointing because I was hoping to hear more about Lee’s story.