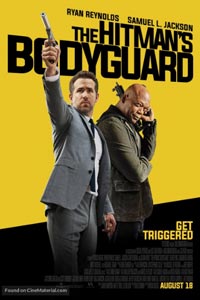 Samuel L. Jackson is the hitman. Ryan Reynolds is the bodyguard. Gary Oldman is the bad guy, reprising his semi-Russian accent from “Air Force One” 20 years ago. It’s an action comedy, so there are chases and shooting and stunts galore. However…

“The Hitman’s Bodyguard” would have worked a lot better if it had just followed Reynolds and Jackson a la DeNiro and Grodin in “Midnight Run” — they have to get to a certain place by a certain deadline, but run into all sorts of obstacles along the way. Instead, director Patrick Hughes and screenwriter Tom O’Connor keep cutting away to people waiting at the destination, looking at clocks and watches and saying, “They have to be here in four hours!” There are flashbacks, too, which get us away from the buddy-movie essence of the relationship between Jackson and Reynolds.

That said, there are some funny scenes with Salma Hayek as Jackson’s wife, a woman in prison who takes BS from no one. Unfortunately, we have to sit through a parallel story about Reynolds’ ex, played by Elodie Yung, but that’s just a time-killer until the next shootout (and there are plenty of those, including an extended sequence along the canals of Amsterdam).

Of course, this is a Hollywood movie, so no matter how many bullets the bad guys fire at Jackson and Reynolds, they can’t kill them, while our heroes can take down anyone at any time with a single shot. The audience I saw this with laughed a lot, and applauded when the two leads emerged victorious from yet another surrounded-by-bad-guys scenario. So it’s a crowd-pleaser, and that’s fine for this point of the summer.