Movie Review: “In & Of Itself” 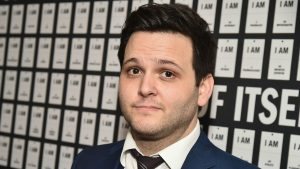 A lot of people are quite enamored of Derek DelGaudio’s “In & Of Itself,” which played Off-Broadway for more than 500 performances, and is now streaming on Hulu. The show was touted as a magic show and an experience unlike any other. Well, that’s true to the extent that it contains the fewest number of magic tricks I’ve ever seen in a 90-minute performance.

The most impressive part is a segment in which DelGaudio shows off his skills as a master card mechanic, including dealing seconds and middles and bottoms from a deck. As with others who have spent years developing those skills (e.g. Richard Turner, who you can see in action here), it is amazing to watch DelGaudio control the cards so brilliantly.

He also does some mentalism involving pieces of paper chosen by audience members in the lobby. Each starts with “I am…” followed by occupations, relationships, or other descriptions (e.g. “an idiot,” “an activist”), which play a part in DelGaudio’s big finale. Frank Oz, who directed both the stage version and this filmed adaptation, uses audience shots from different performances to create a montage of astonishment.

As he shares scenes that may or may not be from his own life, it’s clear DelGaudio is going for an emotional response throughout. I’ll admit that I was touched by one bit involving a letter supposedly written by a relative or friend or colleague of an audience volunteer. The poignancy of the message is clear through the recipients’ reactions. Still, though I have no idea how the trick was done, I felt myself recoiling at the blatant manipulation taking place.

By the way, if you know the secret, please don’t tell me. I prefer to enjoy the wonder of some tricks without any further knowledge, which is how I’ve been able to enjoy things like Penn & Teller’s double bullet catch over and over again.

After we watched “In & Of Itself,” my wife declared the entire proceeding to be boring. I didn’t dislike it that much, but I didn’t love it or leave it with any sense of awe. The overriding problem for me is that DelGaudio spends far too little time doing magic and far too much telling somber stories — and he relates the tales without cracking a smile or giving off any sense that he’s having a good time. I have seen magicians of all kinds, including many who were quite serious throughout their presentations, but this must rank as the least joyful performance ever.