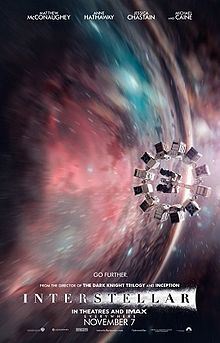 I like many of Christopher Nolan’s movies — “Memento,” “The Dark Knight,” “Inception” — but his latest, “Interstellar” is an epic-length grand effort that falls far short.

It starts with the severe miscasting of Matthew McConaughey and Anne Hathaway. They’re both very talented, but this is not the right vehicle for them. The other stars (Michael Caine, Jessica Chastain, and Matt Damon) all do the job you’d expect, but McConaughey and Hathaway are not believable as astronauts sent through a wormhole to find a new planet for Earthlings to move to once our planet becomes uninhabitable. That’s all I can explain about the confusing plot without giving too much away — and it’s not enough.

A year ago, Alfonso Cuaron’s “Gravity” amazed us by creating a new paradigm for space movies. The way it was shot, edited, and scored was as revolutionary as “2001: A Space Odyssey” in 1969 and the first “Star Wars” in 1977. But “Interstellar” doesn’t give us anything new. In fact, several parts flash back, as if in homage, to “2001,” but what seemed so impressive 45 years ago is now flat out boring.

I watched Kubrick’s space opera with my daughter this summer — the first time I’d seen it in decades — and nearly fell asleep. The pacing was so slow, especially compared to modern movies and television. The mind-blowing sequence of Keir Dullea encountering the monolith and entering Jupiter’s space now seems overly long and drawn out, as if it were someone showing off what they could do with a new box of graphics tools. Like “2001,” “Interstellar” goes on and on and on (running time: 2:47), and Nolan has at least two sequences that mimic Kubrick’s effects exhibitionism, neither of which works.

Then there’s the sound. Nolan has [purposely?] drowned out much of his own dialogue with an intense soundtrack of music and effects. It’s not mandatory that we hear every bit of technical jargon, but when the plot is as confusing as this one, we need clarity, yet there are several times when we can’t hear the main characters conversing because the score has been cranked to eleven.

If you want to see a much better space-themed movie with Matthew McConaughey, go watch “Contact,” the 1997 film based on Carl Sagan’s book, starring Jodie Foster as an astronomer who searches the skies for a signal from space, and when she receives one, all hell breaks loose. “Contact” has one thing in common with “Interstellar” — the story of a girl trying to stay in touch with her long-lost father. But unlike Nolan, director Robert Zemeckis did a good job balancing the science and the humanity, with a cast that includes David Morse, Tom Skerritt, James Woods, Angela Bassett, Rob Lowe, John Hurt, and about half of the anchors and reporters at CNN.

For more specifics on problems with “Interstellar,” read this piece by Nico Lang.