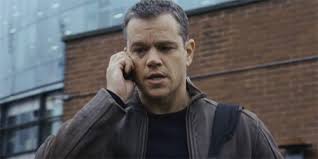 It’s been four years since “The Bourne Legacy” with Jeremy Renner, a decade since Matt Damon played the title character, and what do we get in the series’ fifth outing? Another story that follows the same well-trodden path, in which Bourne pops up on the CIA’s global surveillance system, so he must die. From then on, we get plenty of car chases, fights, close calls, escapes, and high-tech tracking software.

Damon is still very good as Bourne, although he didn’t have many lines to learn. Tommy Lee Jones redefines “craggy” as the CIA director worried Bourne is going to divulge super-secret information. Julia Stiles returns as rogue ex-CIA employee Nicky Parsons, Alicia Vikander (“Ex-Machina,” “The Danish Girl”) has the Joan Allen role, and Riz Ahmed (Naz on HBO’s “The Night Of”) plays the CEO of a giant social media corporation that’s entangled with the agency.

There’s also “The Asset” (Vincent Cassel), another highly-trained assassin that the CIA sends after Bourne. It gets a little annoying that they never assign a name to this character, so Jones is always saying, “Send in The Asset!” or “Get The Asset on the phone.” Even when he’s talking to the guy, he still doesn’t use a name. Just once, I’d like to hear, “Okay, Jenkins, we know where Bourne is, now please kill him, preferably in hand-to-hand combat even though you’re armed to the teeth.”

In these movies, you know Bourne will always win in the end — it’s the chase that matters, with lots of collateral damage — but I’d like to have seen them do something different. For instance, how about a plot where Nicky (Stiles) finds Bourne in his underground life, tells him about a really bad guy who’s after her for what she knows, and because she betrayed the CIA, she can’t go to them for help so Bourne is her only option. That’s the sort of story that could have launched an entirely new direction for the series going forward — one that could also involve Renner or others playing Bourne-like super-field-agents.

Bottom line: if you’ve enjoyed the previous Bourne movies, you’ll probably like this one, but it’s not nearly as good as the first three installments, which should have wrapped up this character for good. I give “Jason Bourne” a 6 out of 10.