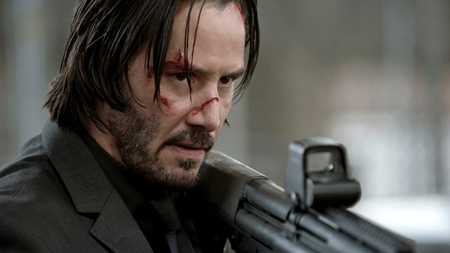 The “John Wick” movies are not going to test your brain. Don’t walk in expecting anything more than full-on action, with lots of gun-fights, a big body count, and a limited amount of dialogue. In other words, they’re perfect for star Keanu Reeves.

John Wick is a hitman with a reputation, part of a vast underground that has its own code, and you’d be a lot better off if you didn’t make him mad. In the first movie, he killed everyone involved in taking his car and killing his dog. In the second movie, he still really wants his car back.

Then a guy shows up at his house to call in a marker, something the rules in Wick’s world mean he can’t refuse. The guy wants Wick to kill his sister in a power grab, but Wick insists he’s done with that life and turns him away, so the guy blows up Wick’s house. Well, if you think Wick went wild over his car and dog, you can only imagine what happens when you level his home.

In the first movie, we heard other characters talking about the time Wick killed three guys in a bar with a pencil. In the second movie, the filmmakers are smart enough to actually show us Wick with his lethal pencil moves. There’s also a scene where he’s given a gun with just 7 bullets to fight his way out of a heavily-guarded place. That’s not a problem, though, because as he goes along killing people, he just takes their guns and continues shooting. It makes perfect sense.

I don’t need to tell you much more about the plot, because by this point you’re either along for the ride or you aren’t. I was, because I enjoyed the intrigue of this mysterious world of anti-Bonds. In fact, “John Wick: Chapter 2” has the sort of action that makes recent James Bond movies seem so tame by comparison. There’s even a scene where he goes to a “sommelier” to get the right weapons to use on his mission — it’s as good as any recent scene with Q in the lab with Bond.

“John Wick: Chapter 2” is probably 75% action scenes like that, which they’ll love overseas and especially in China, where some of the financing came from. There will be more movies in this series — the end of this one sets up Chapter 3 — and I can’t wait to see what the guy can do with just a pen cap.