Movie Review: Keeping Up With The Joneses 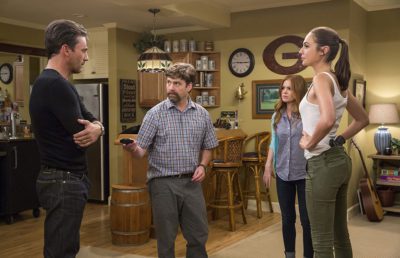 The four of them star in “Keeping Up With The Joneses.” Zach and Isla are Jeff and Karen, a human resources manager and an interior designer. Jon and Gal are their new neighbors, Tim and Natalie, a travel writer and a food blogger. Jeff bonds with Tim and develops a man crush, but Karen suspects they’re not what they say they are, and she’s right. They’re spies, but who are they spying on?

I won’t give much away other than Hamm is at his funniest when he’s playing it completely straight, Galifiniakis plays his character much more pulled-in than his usual over-the-top scenery chewing, and Fisher and Godot are both really good, especially in a scene in the changing room of a lingerie store.

“Keeping Up With The Joneses” is nothing great, but it’s okay as escapist entertainment. I give it a 6 out of 10. And I won’t be surprised when they make a sequel.