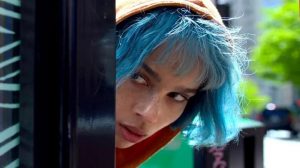 Steven Soderbergh is quite skilled at making tight, compact thrillers. His latest is “Kimi,” which is not the name of its lead character, but a voice assistant like Siri and Alexa.

As the movie begins, Kimi’s creator, Bradley Hasling (Derek DelGaudio) is on the verge of becoming very rich when his Amygdala Corporation issues its IPO. It’s not clear why the technology would be a big hit, considering it does pretty much what the existing devices already do, and almost certainly couldn’t compete in a marketplace where Apple and Amazon are so far out in front. But in a CNBC-like interview, Hasling explains the difference is that there are human monitors checking up every time Kimi misunderstands a user and can’t respond correctly to a request, thus regularly making the product learn from its mistakes.

One of those monitors is Angela Childs (Zoë Kravitz), who suffers from severe agoraphobia, the result of an unexplained ugly incident a few years ago combined with the anxiety brought on by the COVID-19 pandemic. Because Angela lives in a big city (Seattle), she can thrive without going outside because she can have anything she needs delivered to her door — including a Friend With Benefits who lives in the building across the street. But even when he comes over for some time between the sheets, she’s not interested in developing the relationship further.

One day, while Angela is listening to Kimi streams that have been flagged as problematic, she hears something that sounds like a woman being attacked. She pulls out some extra audio extraction hardware to try to isolate what she thinks she heard. It’s here that “Kimi” recalls movies like “The Conversation” and “Blow Out,” with the innocent lead character pulled into a mystery that goes deeper than she suspects. There’s also an element of “Rear Window,” as Angela continually checks out the people in the other apartment building who, it turns out, are doing the same thing in reverse.

Kravitz — who I liked very much in the Hulu series “High Fidelity” — plays Angela’s paranoia and determination very well. I fully believed the panic attack which overwhelmed her as she tried to do something as simple as unlock her front door to go downstairs and get breakfast from a neighborhood food truck.

DelGaudio, meanwhile, displays far more emotional range in “Kimi” than he did in his Off-Broadway magic show, “In And Of Itself” (which I reviewed here). He plays Bradley as the kind of brash, arrogant CEO who needs the IPO to pull him out of a life in which he does media appearances via Zoom in front of a prop bookcase in his otherwise-empty garage while wearing business clothes on top and pajamas from the waist down.

Screenwriter David Koepp (“Jurassic Park,” “The Paper,” “Panic Room,” and the underrated Ricky Gervais movie “Ghost Town”) has devised a nimble plot that doesn’t go off on tangents that pull us out of the tension of the story, although it does turn a little clichéd in its third act. However, Soderbergh keeps the action moving, allows us to learn just enough about the mystery, and doesn’t let “Kimi” fall into the rabbit hole of so many other movies about people in the tech world.

The supporting cast includes Robin Givens, Rita Wilson, Erika Christensen, and Byron Bowers. Their roles are necessarily small, so there’s plenty of room for Kravitz to keep us rooting for Angela.