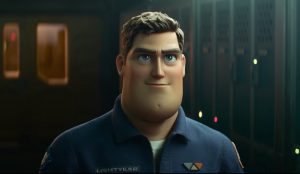 That’s the opening graphic in “Lightyear,” Pixar’s new entry in the “Toy Story” cinematic universe, an animated adventure centered on space ranger Buzz Lightyear versus the evil villain Zurg. I’m not going to even bother trying to explain the plot, because it doesn’t matter. Suffice to say the story borrows from every space saga that preceded it, from the “Star Trek” franchise to the “Star Wars” multiverse, with even a bit of “Galaxy Quest” thrown in.

That’s ironic, because the latter movie starred Tim Allen, who was the voice of Buzz in all the “Toy Story” movies. This time, however, that job is handled by Chris Evans, which has led to quite a bit of debate as to the reason for the change. You can ignore the Twitter pundits who swear Allen was replaced because he’s a conservative victim of cancel culture. That’s as unlikely as the speculation that Allen wanted too much money to reprise the role yet again. The more believable explanation is that Evans is the voice of the movie character Buzz Lightyear, while Allen was the voice of the toy based on that character.

What is apparent in “Lightyear” is that Pixar’s animation wizards have again taken things up a notch when it comes to their digital technology, particularly the skin tones. There’s an early shot of a human hand reaching around a doorway that looks as realistic as it would in a live-action movie. Moreover, director Angus MacLane and his team do remarkable things with reflections – in Buzz’s visor, in cockpit windows, etc.

Since Pixar is a division of Disney, there has to be some cuddly new character that can be spun off into a toy all the kids will be begging their parents for. In “Lightyear,” that is Buzz’s sidekick, Sox The Robot Cat, who coughs up dangerous furballs and says “meow meow meow” and “beep boop beep” when calculating something. Sox is played by Peter Sohn, an in-house artist who has provided voice work for previous Pixar projects “Monsters University” and “Ratatouille.”

The rest of the voice cast includes Keke Palmer, Uzo Aduba, Taika Waititi, Isiah Whitlock Jr., Josh Brolin, Bill Hader, and Darby Steel (whose character looks like a combination of Ed Asner’s Carl in “Up” and Natalie Maines, lead singer of The Chicks). They all do a fine job in service of a story I found lacking in the type of humor and wit typical of the best Pixar productions.

What’s sad about the release of “Lightyear” is that some nations in the Muslim world have banned it from being exhibited because there’s a quick scene of two female characters kissing. Considering how badly actual women are treated in those countries, I suppose we shouldn’t expect more tolerance for fictional characters, particularly those created in a computer. I wonder if Ron DeSantis will try to keep it from being shown in Florida.

In the rest of the world, “Lightyear” will certainly be a kid pleaser. The screening I attended had lots of children in the seats, and on the way out, they were laughing, quoting lines from the movie, and no doubt strategizing how to get their parents to buy them Sox toys.

On the other hand, there isn’t much to appeal to adults. While Disney and Pixar are making a big deal out of the fact that “Lightyear” will only be in theaters (to begin), it comes off more like a direct-to-streaming production that could have skipped right to Disney+ (which is where more youngsters will eventually watch it over and over again).

I give “Lightyear” a 6.5 out of 10. It didn’t knock me out, but I enjoyed it somewhat and am always in awe of what the Pixar geniuses are able to do with a newly-rearranged series of zeroes and ones. Opens in theaters today.