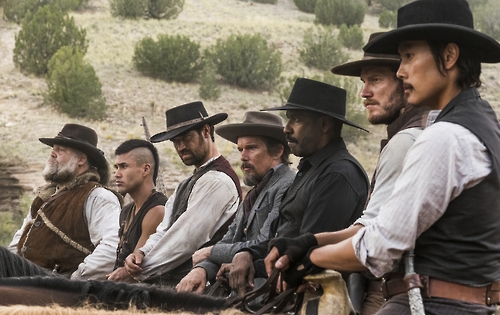 The original 1960 “Magnificent Seven” starred Yul Brynner, Steve McQueen, James Coburn, Charles Bronson, Robert Vaughn (and 2 other actors you’ve never heard of) as the good guys. It was directed by John Sturges, who also made “Bad Day At Black Rock,” “Ice Station Zebra,” and “The Great Escape” (McQueen, Coburn, and Bronson starred in the latter, too). Plus, “The Magnificent Seven” contains the greatest theme song ever written for a western — it got an Oscar nomination for Elmer Bernstein.

The 2016 remake stars Denzel Washington, Ethan Hawke, Chris Pratt, Vincent D’Onofrio (and three actors you’ve never heard of) as the good guys. It was directed by Antoine Fuqua, who has made two other movies starring Denzel (“Training Day,” “The Equalizer”), as well as “Shooter” and “Olympus Has Fallen.” It also has music by James Horner that you will not remember — until the end, when Bernstein’s original theme plays over the credits.

Both movies are about gunmen in the old west who are hired by the people of a small town to protect them from the bad guys. In the original, they were a bunch of Mexican banditos led by Eli Wallach, overacting with a bad accent. In the remake, they’re the enforcers for a ruthless businessman played by Peter Sarsgaard, underacting with a constant snarl.

Denzel plays Chisolm, a gunfighter who recruits a multi-cultural group of defenders at the behest of Haley Bennett, a woman from the town who hires them. Bennett’s previous claim to fame was her 2007 debut as a Britney Spears-like singer in the underrated Hugh Grant/Drew Barrymore romantic comedy, “Music and Lyrics.” You’ll see a lot of her this fall, as she also stars with Emily Blunt in next month’s “The Girl On The Train,” followed by Warren Beatty’s “Rules Don’t Apply,” and she’s fine in this.

It’s fun to see Denzel on a horse, dressed all in black, sporting a weapon on his hip (am I the only one who had a flashback to Cleavon Little riding into Rock Ridge in “Blazing Saddles”?). As in most of his movies, he’s the authority figure everyone else looks to, and he’s more than up to the task. The rest of the cast is okay, although they’re not given anything original to do. Unfortunately, Fuqua follows the lead of so many other action directors by cutting too quickly, so it’s hard at times to see the impact of the bloody gunfights that make up the bulk of the movie.

There’s not much more to say. If you’ve seen the original, you know how “The Magnificent Seven” is going to end. If you haven’t, you can probably guess anyway.

The remake pales in comparison, but it’s not a bad two hours of predictable big screen entertainment. I give it a 7 out of 10.