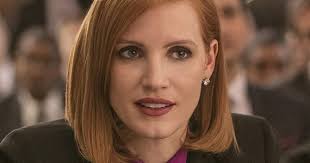 Jessica Chastain is Elizabeth Sloane, a top lobbyist in Washington, DC, for a big firm run by Sam Waterston. She’s focused, intense, and fearless. You’d be much better off having her on your side than working for your opponents.

One day, she’s asked to a meeting with a man from an NRA-like organization that wants her help getting women to buy more guns by making them more afraid. Sloane doesn’t want to do that — so much so that she laughs in the guy’s face. Not long after, she gets approached by the head of a small, boutique lobbying firm that’s been hired by the Brady Campaign to get legislation passed that closes the gun-show and internet gun-buying loopholes. She switches sides.

All of this is framed by Sloane being grilled at a congressional hearing by a senator played by John Lithgow (who doesn’t chomp any scenery, fortunately) over some of the less-than-scrupulous ways she’s done her job, particularly when it comes to the non-explicit bribery of members of Congress. We know that’s a blatant part of the corruption that makes Washington tick, but she’s run afoul of some very important people, and they want to take her down as much as she does them.

In between, we’re treated to closeup views of how Sloane earned her reputation as a bulldog who will do anything to win, regardless of what it means for ethical concerns, her opponents, her colleagues, her friends, or her personal life (she relieves stress by popping pills and hiring male escorts to meet her in hotel rooms).

“Miss Sloane” was directed by John Madden, who did “Shakespeare In Love,” “Proof,” and “The Best Exotic Marigold Hotel.” He gets a very good performance out of Chastain, in a role that wants her to be Julia Roberts in “Erin Brockovich.” It’s not quite that, because the script (from rookie screenwriter Jonathan Perera, trying his best to mimic Aaron Sorkin’s style) doesn’t rise to the levels I hoped it would. That doesn’t mean it’s bad, just not as great as it could have been.