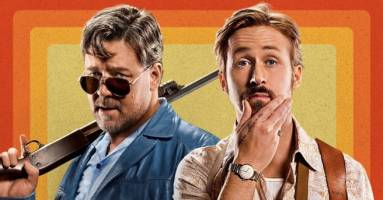 A good buddy action comedy starts with one important element: chemistry. Nick Nolte and Eddie Murphy had it in “48 Hours.” So did Billy Crystal and Gregory Hines in “Running Scared,” Robert DeNiro and Charles Grodin in “Midnight Run,” and even Jackie Chan and Chris Tucker in the first “Rush Hour.”

In “The Nice Guys,” the chemistry between Russell Crowe and Ryan Gosling is more along the lines of Jay Leno and Pat Morita in “Collision Course.” In other words, no chemistry at all. Shane Black, who wrote and directed “The Nice Guys,” should know better, considering he had Mel Gibson and Danny Glover in “Lethal Weapon.”

I get the feeling Black was trying to develop something along the lines of Robert Towne’s “Chinatown,” where the story matters less than the personalities of the protagonists as they try to unravel whatever the hell is going on. Unfortunately, Gosling and Crowe’s timing is awful and their characters’ personalities so uninteresting that they can’t overcome the cumbersome plot.

Oh, “The Nice Guys” also isn’t funny. So what is it? A mess. How else can you explain Black’s choices to put Russell Crowe with a fat gut in a Hawaiian shirt or have Ryan Gosling do a Lou Costello impression next to a dead body for absolutely no reason?

Do yourself a favor and skip “The Nice Guys.” Instead, spend your movie dollars on a buddy action comedy that works — Key and Peele in “Keanu.”