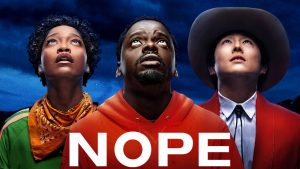 It tells the tale of the Haywood siblings — Emerald (Keke Palmer, from “Akeelah and the Bee” and “Hustlers”) and OJ (Daniel Kaluuya, from “Get Out” and “Black Panther”) — who run a California ranch that supplies horses for movies and TV shows.

After a power outage and a freak storm that kills their father, OJ notices an odd cloud in the sky that doesn’t move with the others, and suspects it may be hiding an alien ship. It doesn’t take long for Emerald to come to the same conclusion. So does Ricky Park (Steven Yeun, from “Minari”), who runs a cheesy Wild West theme park and loves to tell the story of his days as a child actor on a 1990s sitcom that came to an abrupt end when his chimpanzee co-star went berserk on the set and killed the other humans.

Emerald convinces OJ that if they could get footage of the extraterrestrial spacecraft, it would be their “Oprah moment,” making them rich and wealthy. They enlist the aid of an electronics store clerk and a documentarian to set up cameras and wait.

As writer and director, Peele wisely keeps the audience as much in the dark as his characters about what’s happening in the sky, and is in no hurry to reveal the alien ship. In fact, the pacing of the entire movie is rather matter-of-fact, allowing Kaluuya and Palmer plenty of time to develop their characters.

Palmer plays Emerald as a bundle of energy bouncing off the walls, while Kaluuya plays OJ as a man who’d rather be around his horses than people. Because Kaluuya’s eyes are so expressive, he doesn’t have to say much to convey a lot.

The best example is a scene that’s an homage to “Close Encounters Of The Third Kind,” with OJ in a pickup (a la Richard Dreyfuss) while some alien presence hovers above him. At one point, OJ opens the driver’s side door a couple of inches to look straight up at what’s happening. But when he hears a loud, deep, crunching moan, he says “Nope!” and slams the door shut. The moment got a pretty good laugh from the crowd at the screening I attended, which also responded in unison to the jump scares Peele placed at just the right moments.

In addition to the scary sound in the pickup scene, Peele’s audio technicians have created an overall aural atmosphere that enhances the mood of “Nope” so well — including the weirdest version you’ll ever hear of Corey Hart’s 1984 hit, “Sunglasses At Night.”

While I enjoyed the ride, I’m not sure I fully understand what the hell is happening at certain points in the movie’s 130-minute runtime. For instance, is the chimp sitcom story a metaphor for the alien attack or just an odd anecdote in the spirit of Christopher Walken’s wristwatch monologue in “Pulp Fiction”?

It doesn’t matter, because Peele makes it all so entertaining and proves again he’s a uniquely talented filmmaker. I give “Nope” a 9 out of 10, which means it will be on my Best Movies Of 2022 list.