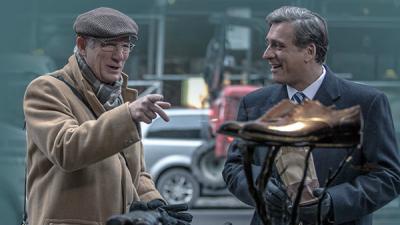 Richard Gere has made a career playing classy, good-looking guys. In “Norman,” he’s cast against type as Norman Oppenheimer, a schlubby Jewish guy in his 60s with a Woody Allen accent whose entire life revolves around making business connections.

In fact, Norman is a lot like Broadway Danny Rose (I kept waiting for him to say, “May I interject one statement at this juncture?”). He introduces this person to that person, and gets a little commission. He knows all sorts of people, but has to hustle every day to find more. He doesn’t have an office, so he does all of his business on his cell phone as he walks around the city, ducks into stores and restaurants, constantly on the move and trying to make things happen. He can be both grating and ingratiating at the same time, and he squeezes his way into other people’s business.

As the movie begins, he’s trying to get a meeting with a big energy executive, but can’t reach him. Then he goes to an energy symposium and sees Eshel, a representative of the Israeli government. Impressed by him, and hoping to use him as a way to get to the energy exec, Norman follows Eshel down the street until he stops in front of a fancy clothing store. Norman strikes up a conversation, buys him a very expensive pair of shoes, and convinces him to go to a dinner party that night at the energy exec’s home. But Eshel’s advisors tell him to stay away from Norman, and he does, causing Norman to be thrown out by the energy executive (Josh Charles).

Three years later, Eshel has worked his way through Israeli politics to become the Prime Minister, and on a visit to New York, he spots Norman and, to his advisors’ horror, hugs him, tells everyone about his close friend, and says Norman will be his connection to the US. This makes Norman a big shot, and everyone who shunned him before now wants something from him — including his nephew (Michael Sheen), his rabbi (Steve Buscemi), and other supporting characters played by Hank Azaria and Harris Yulin (playing the same guy he plays in every movie). Norman also draws the attention of an Israeli secret agent, who uncovers some things about his connection to Eshel that create problems for both of the men.

Some of this sounds intriguing, but it isn’t. Director Joseph Cedar loses the pace halfway through, and for some reason uses a score that sounds like it was lifted from “Curb Your Enthusiasm,” which made me wonder if he was trying to make a satire or a straight-on drama. “Norman” fails on both counts, although I give Gere credit for doing smaller movies like these and parts he wouldn’t seem right for.

Earlier this year, I complained about the casting of Robert Deniro and Danny Devito as an old Jewish comic and his brother in the dreadful “The Comedian.” Well, now we have again have Jewish characters played by blatantly gentile actors — Richard Gere, Englishman Michael Sheen, and Steve Buscemi. The difference is that, in “Norman,” they manage to pull it off.