Movie Review: “Only The Brave” 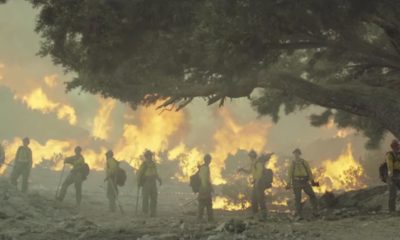 When I was a kid, I looked up to my cousin Mel, who was a volunteer firefighter. I was fascinated by the fact that, whenever the siren went off in his town, he would drop whatever he was doing and race to the firehouse to join his colleagues as they jumped on the truck and headed off to fight a fire. What a selfless act that was, one that took quite a measure of courage — as everyone else was running away from the flames, he and the other firefighters ran towards them in an effort to save life and property.

I still have a lot of respect for firefighters, whether they’re volunteers or professionals, and can’t understand why there haven’t been many good movie dramas about the men and women who do that job. In fact, I can only think of three that are worth naming, though none of them are great: “Backdraft,” “Ladder 49,” and “The Towering Inferno.” Yes, Steve Martin played a fire chief in “Roxanne,” but that’s a romantic comedy where the firemen only appear occasionally as comic relief.

Wildfires have been in the news the last couple of weeks as Northern California has been devoured by blazes that have destroyed hundreds of acres of homes and forests. That makes this a perfect time for the release of “Only The Brave,” a movie based on the story of the Granite Mountain Hotshots, an elite group based in Prescott, Arizona, that specialized in fighting wildfires just like those you’ve seen on your TV screen every day.

It stars Josh Brolin as the supervisor of the Hotshots, Jeff Bridges (still mumbling) as his boss, and Miles Teller as a rookie on the squad. We see the firefighters bonding as they go through drills and work real fires. They do their jobs not with hoses, but with axes and shovels and chainsaws, clearing away trees and brush and anything else that could be fuel for a rapidly moving fire. Those scenes are somewhat exciting, but director Joseph Kosinski and screenwriters Ken Nolan and Eric Warren Singer weren’t content to just focus on the men and their profession. We also get wrapped up in the side story of Brolin’s wife, played by Jennifer Connelly, who wants more out of their marriage, and Teller’s girlfriend and child. They are an unnecessary distraction, but one of the reasons they’re given more than their share of screen time may be that too much of the movie involves Brolin and his men banging away at the Earth rather than confronting the fires directly.

That’s where “Only The Brave” lost me — there wasn’t enough firefighting to keep me riveted to the screen. Even its harrowing climactic scene, which I won’t give away, didn’t flip the ratio of courageous action vs. soap opera drama. That’s a shame, because there’s no doubt that the Granite Mountain Hotshots and other firefighters like them deserve tons of respect and gratitude. Unfortunately, instead of a raging wildfire of a movie, “Only The Brave” turns their real-life story into a boring slow burn.